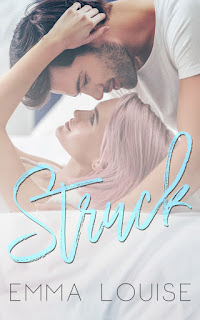 Struck is the third book in the Flawed Love series and my third read from Emma Louise, and it's a series that's gotten increasingly better with each new book I've read so far. This single parent romance is about TJ Harmon, a man who decides to drown his sorrows and heartache with alcohol and a drunken one-night stand. Months later, he's shocked to find out that the woman he was with has not only passed away but that she's just borne their baby, a son named Abel. It's then that his life changes for the better. He has purpose and now, nothing and no one is as important as little Abel. It's father and son against the world. And then TJ meets a woman named Breeze Lucas, and just like her name, she's a breath of fresh air that seems to bring with her winds of even more change. But with at least a decade between TJ and the twenty-year-old Breeze, plus his being her boss at Flex and needing to keep Abel his top priority, TJ may have no other choice but to let go the one woman he's finally begun falling for.

This was a much smoother read compared to the first two books in the series. While TJ being paired off with Breeze came as a surprise, I did believe that the of them had chemistry, making it easier for me to cheer them on towards a happily-ever-after. As individuals, I confess that I may have been more invested in TJ and that had a whole lot to do with his back story and just what a turnaround the guy had when Abel became a part of his life. Together with Breeze, though, it was as if everything was going to finally fall into place for this father-and-son duo. With happy and hearty feels and a good story with endearing characters, Emma Louise's Struck receives four stars. ♥