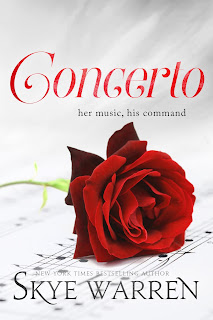 “You don't want to touch me,” he says, gruff, forbidding. Anyone else would back away. It's the growl of a wild animal, a warning sign that makes the hair rise on the back of my neck.

It make me sink more fully around him. I press my forehead against his. God, I've missed this. Missed this closeness. Missed the surety. “I have no rights,” I whisper. “No power. I'm fighting anyway.”


After finishing Overture about two and a half months ago, Concerto immediately became one of my most anticipated reads for this year. I needed to know what awaited Liam North and Samantha Brooks and how their relationship would evolve now that Samantha was going to leave the security of the home she shared with Liam for six years. They know that it's Samantha's very much living father who is the source of the threat, but what kind of threat he presents is unknown. It's clear to everyone that it's revenge he's after, but rather than watch his own back, Liam refuses to leave Samantha unprotected even if he knows keeping his distance is what's best for her. So, he keeps tabs and entrusts her to his younger brother, Joshua, as she begins to prepare for an all-star tour. But it seems his nemesis is steps ahead of him and that can only mean that someone within his circle has betrayed them.

Gah! This series has just gotten better with the heightened element of suspense! North Security got off to a fantastic start introducing readers to the complicated beginnings of Liam and Samantha's lives as guardian and ward and the six years that would follow, especially as both of them back more and more aware of each other the older Samantha got. Now, there's the whole threat coming from Samantha's father that's added to the tension between them. Liam knows Samantha deserves the world, especially with the sort of musical gift that she has. She is, after all, a prodigy, and she should experience everything she can. Naturally, this pings all of Liam's jealous and protective instincts, so there's a whole lot of push and pull coming from these two, especially from bossy and broody Liam's end. But goodness, when they just let go and allowed their feelings to come to the surface...so hot!

Yes, this does end in a cliffhanger, so naturally, not everything is resolved, and yeah, this is going to be another three-month wait for the third book that closes out Liam and Samantha's story, but I'm going to be absolutely patient about the whole thing. Okay, maybe not ABSOLUTELY patient. I'll probably whine and complain, but I've got all my fingers and toes crossed that Skye Warren is going to make the worthwhile. I'm also hoping that the younger North brothers--Josh and Elijah--get their stories told, but I'm guessing that depends on how everything plays out in book three since Warren could completely pull a shocker and have something happen to one or both brothers. If the romance and suspense is as good in Sonata as it is here in Concerto, I shall be a happy camper. Five-plus stars! ♥