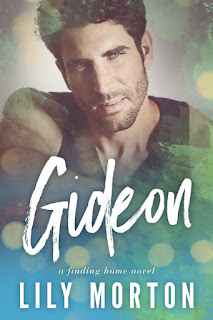 “I just need to protect you,” he says almost staunchly, and I feel something warm in my stomach at the earnestness in his words. I don't think anyone has ever said that to me before, let alone wanted to do it. I've had impassioned words of longing poured into my ears, declarations of infatuation, but nothing like these simple words which are all the more touching for being plain.


What is there not to adore about Lily Morton's Finding Home series?!  It certainly had huge shoes to fill, what with how amazing the author's debut series, Mixed Messages, turned out to be, but then I need not have fretted, not when this follow-up turned out to be just as wondrous. Third novel Gideon is a book that I suspect closes out Finding Home--but if it doesn't, you won't hear me complaining!--and if my suspicion is right, then Morton's ended this series on a fabulous high, all thanks to her awesome writing and the story of a famous actor who's lost his footing, no thanks to his addictions and vices, and the extraordinary private nurse who helps to mend not just his body but his mind, heart, and soul as well. This can be read as a standalone, but I highly encourage you to read the first two novels in the series--Oz and Milo--because the main characters from there are peripheral characters here.

At thirty-nine, Gideon Ramsay has achieved a great deal in his acting career. He's got the sort of looks and talents that can't be manufactured nor produce by simple hype. Unfortunately, over-indulgence has taken a toll on Gideon, to the point that he's struck with pneumonia and only some honest-to-goodness rest and relaxation will help him fully heal. He'll also need one hell of a nurse to make sure he stays on the straight and narrow while on a weeks-long cruise for seniors. Gideon's lucky that Eli Jones takes his job seriously, and you'd think Gid would consider himself lucky that Eli also happens to be seriously hot and a genuinely good-natured and good-hearted guy. But there's no way either of them can act on their mutual attraction, not when Eli is under Gid's employ, not with Eli being twelve years Gid's junior, and certainly not with Gid keeping his sexuality hidden deep in the closet.

Ah, but how I adored Gideon and Eli's story and how their relationship evolved from that of being strangers who meet as patient and nurse to unlikely friends and then on to far more than either of them could have ever anticipated. Both Gideon and Eli develop very well as main characters, too, although Gideon more so than Eli since the latter already came off as quite well-rounded to begin with. Then there's Gid's relationships with his younger brother, Milo, as well as his closest friends--Jacinta Foxton, Niall Fawcett, and Silas Ashworth--and I loved how those evolved in their own way. There may or may not also be a surprise cameo appearance here, but you'll have to read the book to find out, and I very much recommend you read Gideon along with the rest of Lily Morton's novels especially if you're a fan of well-crafted romances with humor and angst. This favorite earns five-plus stars. ♥

Read my reviews for the Coming Home series: