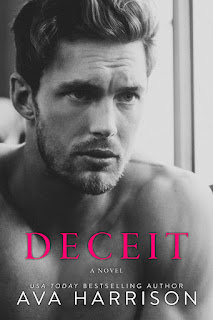 Sigh. I hate writing these kinds of reviews. I went into Deceit smitten with the blurb for Ava Harrison's new standalone. A deliciously hot Brit who also happens to be a member of the peerage and a royal at that plus a sassy and independent American who's gone across the pond to fully heal her broken heart? Ummm, yes, please! Plus I'd already read Harrison's Montgomery series earlier this year, so I knew she was capable of writing an entertaining romance. Alas, this kinda-sorta-maybe royal romance fell short of my rather lofty expectations for it.

Thirty-one-year-old Addison Price is enjoying everything the English countryside has to offer, but should that include the intriguing and handsome stranger she comes across as well? There's no denying that Addy is drawn to Oliver Blackthorn, and the thirty-year-old is just as taken by her. Theirs could be the sort of romance that fairy tales are made of, but what Addy isn't aware of is who exactly the man she's falling for is. Her Olly isn't some ordinary British man; he's none other the 16th Earl of Lockhart. For Addy, lies and love so do not a happily-ever-after make.

I feel terrible because more than half of the book was going so well before everything fell apart. I loved the romance between Addy and Olly (bonus points on the male main character having the same name as my four-legged, furry baby, although Ollie's nickname is spelled differently). It was all swoony and steamy and then we got to where the truth came to light. While I love my angst and I like drama, too much of a good thing is, well, not good. This does have a happy ending, but it felt rushed and I was disappointed by that point. Three stars for Deceit. ♥