Review: The Art of Love by Leslie Pike 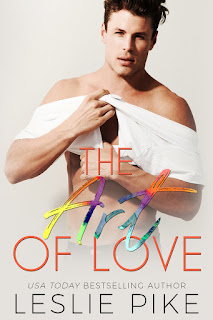 Formerly titled Sexceptional, The Art of Love has been re-released with a new cover and title but contains no new material according to its author, Leslie Pike. This second-chance romance is my second read from Pike, and it's the story of struggling artist and model Oliver London and speakeasy owner Stori Ryder. They were each other's first love, but when Stori and her family upped and disappeared without a word of goodbye when they were sixteen, Oliver was left hurt and heartbroken. Who would have thought that they'd see each other again at thirty-three on a celebratory cruise for their friends's wedding? They were each other's first love; is this their chance at forever?

This was a sweet story about second chance between high school sweethearts. Stori had her reasons for leaving--yeah, I'm not saying what those were because, hello, spoilers--and I appreciated that there wasn't all of the usual bad blood that you find when it comes to this particular trope. She and Oliver led separate lives and it's not as if these two were celibate, and while I know some readers don't like that, it adds a layer of realism to the story. I mean, come on, they were apart of nearly two decades, and pining away for each other would not have made me a believer of their romance. That connection they shared was still there, and to me, that's what counted the most.

It was easy enough to like Oliver and Stori, but they also happened to have several supporting characters who were quite memorable. If you've read Leslie Pike's novella, The Adventure, which FYI, is currently free so get downloading, then Fig (Dragoni) and Zarah should be familiar characters. Piper Mann is an influential side character and Prudence, aka Prue, was notable from the very beginning. Louise, who just happens to be Oliver's Jack Russell terrier, gets bonus points for being irresistibly adorable. So, with an entertaining story about finding your first love again and a great cast of characters, The Art of Love turned out to be a good, four-starred romance. ♥

Purchase The Art of Love on Amazon.