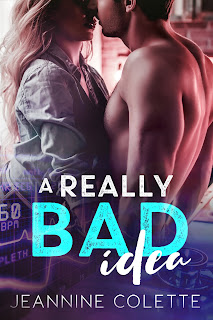 Jeannine Colette is a new-to-me author and having her latest standalone release be my introduction to her writing was A Really Bad Idea...NOT! This friends-to-lovers romance is headlined by thirty-two-year-old Meadow Duvane and thirty-three-year-old Christian Gallagher, best friends and co-workers, he as a heart surgeon and she as a nurse practitioner at Park Avenue Cardiology. Now if only the kind of heart surgery Christian did involved repairing all the damage Meadow's cheater of an ex-husband brought on, she'd be forever grateful. However, Christian does offer to help her out with one teeny, tiny "problem"--having a baby. With Meadow's mother hounding her about her ovaries withering away, maybe freezing her eggs isn't such a bad idea...except Christian's got a plan of his own and that's for them to make a baby the old-fashioned way. Meadow can't help but be tempted by the offer, no matter how bad of an idea it may seem. Christian's caveat? They need to go on three dates before dealing with the baby-making part, but did their plan include falling in love? Will their friendship--and their hearts--survive the fallout?

This was a thoroughly enjoyable read! I loved the friendship between Christian and Meadow and how none of it felt put-on. There was the genuine connection that was there from the get-go, and I enjoyed seeing how their relationship would transition from friends to lovers and what changes, if any, would take place. It was waaaaay too easy to like both Christian and Meadow, and that's already half the battle there because I like being able to think of the main characters in the books I read as real people and if I would be able to, at the very least, tolerate them in real life (what can I say, I'm choosy about the people I surround myself). These two had good back stories and while their families and friends may have been a wee bit too intrusive, they were also highly supportive and protective as well. As much as I have a thing for angst, I actually liked that this wasn't an overly heavy nor dramatic read. This simply was the story of two best friends who take a risk and it pays off because they get the best possible gift. A Really Bad Idea was my first read from Jeannine Colette but it certainly won't be the last! Five stars. ♥