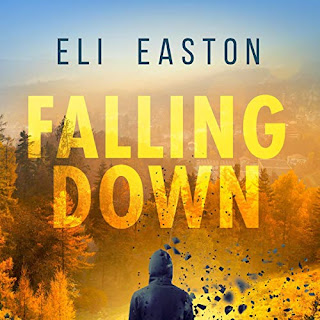 Note: The audiobook was provided by the author via Signal Boost Promotions.

"There are always more sunsets."

"Yeah, but there's never that sunset." Or that one particular human being, the only one who loved you.

Eli Easton is a go-to author for me, and what started my adoration for her writing was my first-ever read from her back in 2016: Falling Down. When I learned that it was being released as an audiobook, I simply knew I had to add it at the very top of my must-listen-to list. As an eBook, there was a whole lot of introspection going on, and now as an audiobook, I found myself falling in love all over again with the story of eighteen-year-old Josh and twenty-four-year-old Mark, two men who know what it's like to spiral downward, hoping to find some way to get back up.

Joshua Rivers makes his way up north with nothing more than the meager contents of his duffel bag and his mother by his side, only all that's left of her are the ashes Josh has. When Mark Sullivan spots him, there's a moment of recognition--not because Josh is someone from Mark's past but because the former Marine knows all to well the bleakness that cloaks the younger man. Mark offers Josh a job and a place to stay, but as much as Mark wishes he could save Josh from everything that haunts him, he knows Josh must first need to want to save himself.

It goes without saying that the Eli Easton's story was already a winner for me. Her writing is impeccable, with a heartrending yet hopeful tale that had me in a contemplative state throughout. Michael Stellman's narration, however, did the near impossible: it elevated what I had already considered a masterpiece and made it the product of two geniuses: Easton and Stellman. I simply cannot imagine giving voice to Easton's words here other than Stellman; if you've never experienced either one, then you're sadly missing out. Five-plus stars go to Falling Down. ♥

Purchase Falling Down on Audible | iTunes.