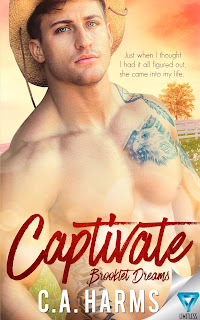 It's been a pretty long wait, but we now have the second book in C.A. Harms's Brooklet Dreams series, which is a spin-off of the loved Southern Boys series. Captivate is another friends-to-lovers story, only this time, the friendship between the main characters is far longer than the one featured in the series starter, Allure. Mike and Maddison have been best friends since they were children, alongside their other best friend, Rhett (whose own romance plays out in the first Brooklet Dreams book), with Maddison even playfully calling both guys her "cousins", what with their parents being best friends and all (and these parents have their stories told in the original series, Southern Boys). As they've grown older, though, Mike can't help but notice just how much Maddison has changed from the little girl he used to hang out with to a beautiful young woman who seems to catch every guy's eye. When Mike retires from the military and returns to Brooklet permanently, he knows pursuing anything beyond friendship with Madd could be disastrous...or it could be the best thing to ever happen.

This friends-to-lovers romance was low on angst and was pretty sweet. I liked the friendship between Mike and Maddison, and it really was this genuine friendship that only became flirtatious some time after Mike had returned to their hometown and getting back into the groove of civilian life. It was pretty clear that the non-platonic feelings were mutual, but these two did engage in quite a bit of pussyfooting. In short, it took a reeeaaalllllly long time before they got their act together, to the point that the change in their feelings for each other has them at an absolute loss and well, they don't really handle it well. There's a fair amount of heartache on both ends, but yes, these two do manage to realize the error of their ways, learn to communicate better, and finally (FINALLY!) deal with their romantic feelings. All in all, Captivate was a great read and one that I enjoyed. I'm giving this four stars. ♥