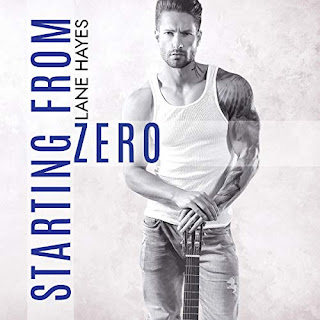 “I mean, I've written something I think works, but...I get nervous when things feel like they're coming together. It never works out well for me. I usually fuck it up somehow.”

“We're in this together, Jus. You won't fuck anything up.”

I closed my eyes and pressed my lips to his. I memorized his scent as I breathed him in like a fine wine or a sweet perfume. Words like clean, new, coffee, manly, peppermint came to mind. I knew Immediately that they were useless adjectives. They might remind me of this moment, but they lacked the poetry needed to describe him. Or to describe the way I felt about him. Or how nervous I felt that his beginning might be the end of us.


There are authors whose books I love to read and authors whose books I love to listen to. Lane Hayes just happens to be one of the rarefied few who falls into both categories, and that has a great deal to do with the fact that she simply seems to always have the most gifted of narrators lending their voices to her stories. Such is the case, once again, with Starting from Zero, the first in her Starting From series. Here she's got none other than Michael Pauley, the same guy who breathed life to her characters and stories in all the currently available audiobooks from Hayes's Out in College series. Can these two simply be permanently tied together when it comes to audiobook releases?

Starting from Zero isn't Lane Hayes's first time to write a rock romance, but this had a very different feel from her A Kind of stories--and if you've yet to read and listen to that series, I highly recommend that you check it out as soon as humanly possible!--adding a May-December touch with the already established, award-winning songwriter Gray Robertson and the still struggling but undeniably talented band leader and songwriter Justin Cuevas. But don't think of them as merely a mentor-mentee songwriting sort of relationship because Gray definitely learned quite a bit from the younger Justin, especially when it came to seeing the different views of the world through new lenses.

Lane Hayes knows how to craft these kinds of stories--the ones that can be easily read but are in no means easy journeys for her characters. You can feel the layers of complexities she's got there perfectly camouflaged in what looks like a simple M/M romance. Hayes never underestimates her readers, and that is always a good thing. And now that she has Michael Pauley gracing this new story with his voice, it becomes a wholly new but still enthralling experience. Pauley's voice sweeps you away, not merely telling you a story but allowing the characters to share their tale with you. The Starting from Zero audiobook is the perfect example of how romance audiobooks should be produced, and it's one that I'm highly recommending all audiobook lovers out there check out. Five-plus stars. ♥