Review: Once Upon a Wolf by Hurri Cosmo 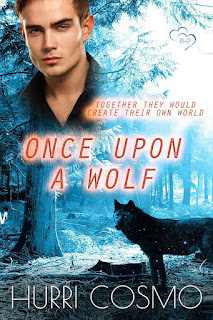 Hurri Cosmo was a new-to-me author when I first caught glimpse of the blurb for Once Upon a Wolf, and the story definitely held promise--a promise kept with a fascinating paranormal romance about a man named Hawk Morgan struggling to live a life in seclusion and relying on the the harsh environment around him and the enigmatic lone wolf he names Ghost who becomes his protector. They started off being probable hunter and possible prey, but as the days pass, human and wolf form a bond that has them constantly watching over each other, seeking the presence of the other and noting any absence. Hawk has no family left to speak of and he believes he's destined to live his life on his own for fear of any retribution that may await him for a perceived crime. On the other hand, Ghost is a wolf unlike any other, leading him to become an outsider in his former pack. Together, Hawk and Ghost traverse the dangers that await them in the wilderness as well as the mysteries swirling between the two of them.

I loved reading about this journey that Hawk and Ghost were on. In the beginning, they were nothing more than two beings who happened to be in the same space, but then as time went on, they nurtured this bond that, well, reminded of the one I share with my own dog that I consider like my own child and who I talk to and treat like a human more often than not. Of course, Ghost is no ordinary wolf--he's a shifter, so while the initial stirrings that Hawk felt may seem strange, the knowledge that Ghost will shift later on into a man and that the bond they share is one between mates underlines the common thread that paranormal romances of this sort have. However, the author did a highly commendable job adding touches here and there to make this their own. This isn't necessarily an angsty read, and as Hurri Cosmo noted in their bio at the end of the book, they don't really do angsty books, and I'm good with that even if I am an angst addict--though to be fair, I felt there was a smidgen of angst here nonetheless, and that was good enough for me. Once Upon a Wolf turned out to be a very addictive read. 4.5 stars. ♥

Purchase Once Upon a Wolf on Amazon | Apple Books | B&N | Kobo.