Review: The Difference by Kaylee Ryan 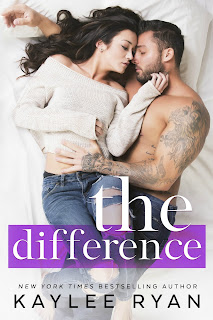 Ooh! I do believe I've finally come across my very first five-starred read from Kaylee Ryan. There have been several other books of hers that have come enticingly close to getting five stars, but The Difference had that extra bit of something that had me sit up and pay attention. This is the story of speech therapist Addyson Grace Stafford and architect Lucas Oliver Prescott. After a string of relationships with men who proved to be duds, Addy announces to her best friend that she's benching herself from any future dates or any sorts of encounters with men. Luke overhears her conversation and is immediately intrigued by the beautiful one who's had her heart broken and trust taken advantage of one time too many. He wants to show her that not all men are like the ones she had misfortune of being involved with, but Addy is skittish and wary. What will it take for Luke to prove to her that he's different?

It would have been really easy for me to have allowed my frustration to get the better of me while reading this book, but I also had to remind myself that Addy was someone who had basically just given up on ever finding "the one". I think that jumping to the conclusion that Luke was a good guy would have been my go-to but as he strove to prove himself to Addy, the more readers get to see for themselves exactly what sort of man he is and if he was as worthy as he claimed to be of Addy's attention and trust. And seriously, who could blame Addy for being as distrustful of men as she was throughout most of the book? I liked having a female main character who felt as real as she did because I could empathize with the feelings of frustration and failure on her part, almost as if she was wondering where she'd gone wrong choosing all these losers when in hindsight, it was nothing she had truly done.

Time flew by as I was reading this book, which is always a good thing because it basically means I was so into the characters and story that before I knew it, a couple of hours had come and gone. Kaylee Ryan did a fabulous job with both character and story development. The pacing of the story was spot-on--as you could probably tell from the fact that nothing could distract me the entire time I was reading this book--and my interest never waned. I really liked Addy and if there were more men in real life like Luke, I'm pretty sure there would be fewer broken hearts out there. I'd also like to make mention of their respective best friends, Harper Scott and Justin Atwood, who had their own romance happening on the side but never stole the spotlight. With a hint of angst, The Difference is a well-written contemporary romance that unexpectedly had my heart in a matter of hours. Five stars. ♥

Purchase The Difference on Amazon.