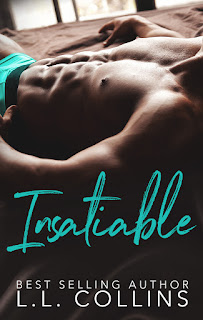 It may have been more than a rather lengthy wait, but L.L. Collins has delivered one hell of a fantastic read, making those two years, one month, and two days (yep, totally counted) in between the release of the first Kingsley Brothers (yay for the duet getting a title!) book, Ravenous, and this second one, Insatiable, more than worthwhile. A word to the wise: I may be mentioning a couple of details here pertaining to book one that could turn out to be spoiler-like in nature should you be a reader who has yet to fall in love with the story of Brecken Kingsley and Raven Phillips, who do appear in book two as supporting characters and whose own relationship continues to evolve here. So if you choose to go ahead and read this review, consider my previous statement as your heads-up.

Witnessing his twin brother, Breck, marry the woman who captured his heart may give thirty-one-year-old Porter Kingsley pause and in awe, but it isn't absolutely enough to have him even contemplating the same fate for himself. No, Port is more than okay with not being tied down to one woman and sleeping with whomever he wants. He's even got a regular or two that he spends his time with in bed, but he's certainly not looking for any sort of commitment. He came too close to it once and ended up getting his heart eviscerated in the process. He's only committed to his patients as a neurosurgeon, the youngest one to achieve the level of success he is, and nothing is going to stop him from living his life the way he has. That is, until he meets Kaya Hensley, the new doctor to join the obstetrics staff. The thirty-two-year-old is gorgeous and fiery and is absolutely NOT interested in Porter.

Sometimes it takes rejection--especially when you were actually expecting the opposite--for us to take stock of ourselves and our lives and realize that maybe not everything is as okay as it may seem. Porter was the guy that every girl wanted to be with in bed, and while he may not have been consciously doing it, he need the girl that he wanted to be a part of his life, and that was none other than Kaya. I love that these two challenged each other, pushed and prodded one another until they saw that they were, indeed, exactly what the other deserved to have. The sex was hot, the romance swoony, but those heartfelt moments--some which I would consider "quiet" ones--stood out to me, the ones that involved Port with Breck and Port with his family and with the kids at the youth center and Kaya with her sister Leilah and then with her patients. There was so much about this novel that made it more than ordinary, and I sincerely hope L.L. Collins has more novels in the works soon. Insatiable snags five stars. ♥

Read my reviews for the Kingsley Brothers series: