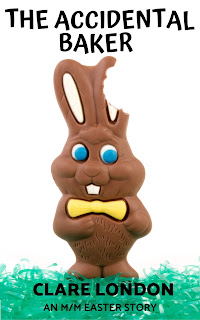 The Accidental Baker is a novella penned by Clare London that's basically composed of four stories about four different couples who stumble upon a promising beginning to maybe something more by way of some runaway chocolate Easter treats. It all starts off with Donnie Watson who loves to bake even though his best friend thinks he isn't all that great at baking. When a tray of chocolate concoctions go tumbling, Donnie isn't able to save all of them. Three particular misshapen pieces end up with three different guys who go on to not only share their found treat--which all happen to surprisingly taste fabulous--with one person each buy also a hint of a promise of more...

This was a fun read, and I enjoyed the four couples, although admittedly, I liked two more than I did the rest. Donnie and Will's story was lighthearted and I loved the idea of the supposed bumbling amateur baker and the new veterinarian in town getting through awkwardness but still having that connection. I also really liked Simon and Trev's tale--the former being the former owner of the downtown bakery and the latter having bought it--because their meeting leads to an unlikely positive turn of events in Simon's life. These may only be snippets that we get but they are all complete stories. Sure, they don't contain your typical definition of a happily-ever-after but what these couples have--and it was far more realistic for it to go this way in my eyes--instead are promising beginnings to potential relationships. I appreciated the sense of hope and the lighthearted feel--with a pinch of angst--each story had/ The Accidental Baker was a four-starred quickie read which left me with a smile on my face. ♥

Purchase The Accidental Baker on Amazon.