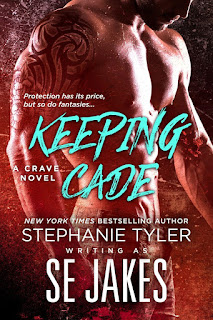 SE Jakes kicks off her new Crave series with an M/M/M romance, and it was certainly up to the challenge--the challenge being whether or not this would end up among my short-stacked M/M/M "OMG, Yes!" pile or the sadly overflowing "Oh no..." pile. I'm happy to report that Keeping Cade has landed on the former, thanks to an intriguing trio and an equally intriguing story. This new series is a spin-off of the author's Men of Honor series, with Crave specifically mentioned in Bound by Honor, the first book in the aforementioned series. While I've read a number of Jakes's books, the ones in her Men of Honor aren't on my "read" list as of yet, but I was still able to fully enjoy and understand what was going on in this book and the mention of characters from her previous books didn't wholly deter my attention, although now I'm really curious and may have to bump those up as "to-be-read".

Crave hosts Fantasy Week twice a year and it's an opportunity for patrons to live out their illicit fantasies. It's one of the most popular events at the club but when former Army Ranger Cade shows up with his fantasy card, he's far from thrilled. He may not necessarily shy away from taking his sexual encounters to the edge, but whatever's on his card isn't at par with his personal preferences, and as drawn as he may be to the two men waiting for him in Room 4 of Crave, knowing what's brought him to the club has him tense and anxious. When Cade's discomfort pings former SAS Tegan and Vic's awareness, they put a stop to the fantasy immediately and insist that Cade allow them to help. As the three men become more entangled with each other, the more ensnared they are in a web of blackmail and vengeance. Tegan and Vic want to keep Cade safe, but by the end of it all, will they all be in danger?

This was a really good read, one that had tension from start to finish, sexual and otherwise. Cade, Tegan, and Vic had me wanting to dig even deeper into their back stories and finding out as much about them as possible. These three made for a highly intriguing throuple, especially given their past work with their respective country's military and with Tegan and Vic doing mercenary work and Cade being a fighter--legal and not-so-legal. Now, I'm always hesitant when it comes to books involving three main characters because I need to be able to believe that the feelings go beyond lust and that it's fairly equal all around. Thankfully, I got exactly that here, what with SE Jakes doing a great job highlighting that inasmuch as Tegan and Vic already had some history, they were also still feeling each other out, same as they were with Cade and vice-versa. Keeping Cade is a 4.5-starred to the new Crave series. ♥