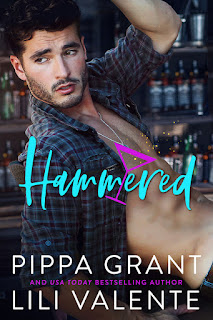 This is what I've been waiting for my entire my life.

“I'm gonna fucking deserve you,” I promise. “Deserve this.”

“You already do deserve it,” she says.


I liked Hosed, but I thoroughly and absolutely ADORED Hammered! Pippa Grant and Lili Valente are back with the second novel in their Happy Cat series. This had a sweet and sappy (and no, sappy is so NOT a negative thing!) feel to it alongside all that quirky humor that could only have come from the love story of the town's bad boy trying to clean up his ways and leave his not-so-great reputation in the past and the hippie and happy good girl with a heart of gold who sees all the positive things in the world. I lost count of the number of times this book made me smile and even laugh quietly. I didn't have a care in the world that I was reading the first half of this in a café while waiting for one of my dearest friends for a lunch date (that may not sound like a long time but my friend was super late, so I had more time to read than I'd anticipated and I loved this book too much to notice just how late he was!

When twenty-five-year-old Jace O'Dell finally acts on his secret crush on twenty-four-year-old former Californian turn Happy Cat resident Olivia Moonbeam and they share an unforgettable night together, he thinks it's the beginning of forever with the beautiful blonde who makes him want to be worthy of her. That's quickly nipped in the bud when Jace's ex-girlfriend informs her that she's pregnant. Knowing he needs to do the right thing, he informs Olivia of the turn of events. The two try to pretend they can be "just friends" but the connection they have is too passionate and intense to simply remain platonic. So, what's a girl like Olivia to do when the guy she believes is her soulmate is making the biggest mistake of his life? Why, hop on her Vespa and kidnap the blackmailed groom-to-be from his nuptials and put him in the sidecar, of course! Just ask George, Princess, and Sir Pendleton.

Who the heck can resist a story about a reformed bad boy, an unapologetic new age practitioner, a conniving ex-girlfriend, a dimwitted deputy with an agenda, and the world's strangest menagerie of animals and humans in Happy Cat? Not only did I love the unique road map that Pippa Grant and Lili Valente decided to use with this romance, but I loved how unapologetically silly and sappy it was! And yes, sappy is a good thing because only the best sappy love stories can make me go "awww!" out loud and more than once at that! Jace and Olivia had very deep feelings for one another, but the complication comes early to their blossoming romance, no thanks to Jace's ex. For all of Jace's past, he's now a man who simply wants to do the right thing even if it means letting go of the one woman who's made him feel as much as Olivia has. Le sigh. But this does end happily, so no fretting, people!

Can I just say that I can't recall any other book entertaining as much as the combination of a raccoon named George, a hedgehog with the moniker of Princess, a stuffed squirrel dubbed Sir Pendleton Macavoy, and an alpaca mistaken for a llama called Chewpaca have as a supporting cast of characters? That's not to say that the efforts of their human counterparts were anything to sneeze as--pun intended, but you'll have to read the book to get why sneezing is such a big deal--because Jace's brothers and Olivia's sister and friends were essential to making this an even better read than it was. Even the villains and the rest of the townsfolk of Happy Cat had their roles to play and they all truly gave this book the sort of feel that I love in the really well-written small-town romances. The bar's been set high for Hitched and the fourth book (there HAS to be a fourth one!). Five-plus stars for Hammered. ♥

Read my reviews for the Happy Cat series: