Review: Let Me Show You by Becca Seymour 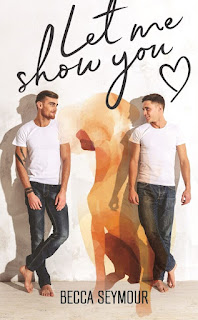 Becca Seymour is a new-to-me author and Let Me Show You is my first read from her. This M/M romance is about two of the more recent new residents of Kirkby, a veterinarian named Carter Falon and a building contractor named Tanner Grady. When Carter's grandfather passes away and leaves him with a somewhat dilapidated house in a small town, Carter decides to move there and easily finds a job in a veterinary practice. The house definitely needs some major fixing up, a point that becomes even more glaringly obvious when Carter steps through some rotting flooring while rushing to answer the door. The last thing he would have wanted was for his potential contractor to find him buck-naked from the shower and in pain, but that's exactly how Tanner first meets Carter. With work picking up since he and his best friend and his best friend's infant daughter--both of whom he considers his family--moved to Kirkby three months ago, Tanner has never had to contend with his self-imposed rule regarding becoming involved with a client, but Carter tempts him like no one else, and the feeling is rather mutual.

This was a good enough read, one that had a lot of light moments mixed in with a few slightly heavier ones that deal particularly deal with bullying and put-upon homophobia. Carter and Tanner are easy to like as main characters and the fumbling kind of flirtation and friendship these two start off with added to the fun part of the story. There isn't a whole lot of drama that comes from either of them, and for all intents and purposes, they have what I'd consider a fairly easygoing romance. Both guys are sweet and caring, and it extends to those who are closest to them, like Carter with his co-worker Lauren and his parents and Tanner with his best friend, Davis, and Davis's baby, Libby. I was looking forward to seeing how Rex, the Rhodesian Ridgeback that Tanner adopts plays into the story, but he wasn't featured as prominently as I'd expected nor does he play a major role in the romance between the two men. In terms of the writing, the flow was choppy at times, as if I'd missed something, especially with regards to the villain in the story, Scott Anderson. Still, Let Me Show You was a pretty good four-starred read. ♥