Review: Want Me by Neve Wilder 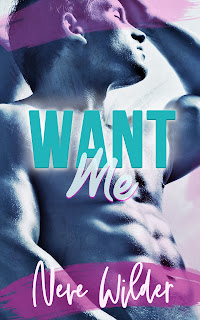 Eric and I got each on some primal, subdermal level that maybe I'd never fully understand, and I was fucking kidding myself trying to fight it. So that left me with what? Was my best hope that somebody enough time would pass that I'd forget about him and my heretofore vanilla existence would somehow be fine again?

Those close to me that are familiar with my reading and listening preferences know that M/M romances hold a special place in my heart. More often than not, they're my go-to when I'm choosing among a slew of books to read first. The M/M roommate trope is a personal favorite, but it's been a good, long while since I last read one that really resonated with me...until now, and I have Neve Wilder to thank for that because her latest release, Want Me, is everything I wanted and needed in a romance. I'm already done reading but I still can't get rid of the silly grin on my face courtesy of Wilder's writing and this story of two housemates who were barely friends that become lovers.

There's a reason why doors come with locks, but the realization came a wee bit too late for Nate Sanders. No one likes getting caught with their pants down--literally or figuratively--but of course, Nate's situation was amped up considering he was busily, erm, pleasuring himself when one of his housemates opened the door to his bedroom. Cue awkwardness...and maybe some interest, too? When Eric offers to tutor Nate with his calculus work, Nate takes him up for it, but soon enough, the two are engaged in a whole different kind of extracurricular activity. Instead of it being a one-and-done thing, however, Nate and Eric find themselves becoming quite addicted to their extracurricular activities, but for how long can they keep it a secret, and is this just hooking up or leading to more?

Truth be told, I was expecting nothing more than a couple of hours of reading a good M/M romance and then being done with it. However, Nate and Eric's story turned out to be a whole lot more, and I was rather smitten with these two about a quarter of the way in and absolutely obsessed with them and totally emotionally invested by the time they got their happily-ever-after. Originally released through the author's newsletter in installments, the book form didn't feel like a compilation of "episodes". It honestly felt like a full-length novel about two housemates who hook-up and deal with the complexities of re-discovering one's bisexuality while keeping it on the down-low. Neve Wilder gave this what I call the romance trifecta--heat, heart, and humor--and I wonder if we'll be seeing more of the other characters because my curiosity has been quite piqued. Wink, wink. Five-plus stars for Want Me. ♥

Purchase Want Me on Amazon.