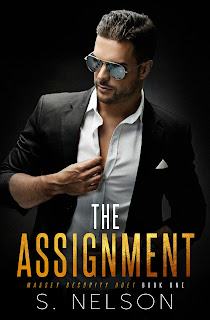 This book has a fair bit of S. Nelson's writing that I first fell in love with more than three years ago courtesy of Marek, the first in her Knights Corruption MC series, minus the motorcycle club. The Assignment is the first novel in Nelson's new Massey Security duet, and it introduces readers to Ford Massey, an ex-marine who owns a private security firm alongside his younger brother and fellow ex-marine, Owen. Ford is still mourning the death of their sister when he's informed by Owen of a new client who turns out to be a famous film producer receiving death threats. In order to ensure the safety and security of his fraternal twin daughters, Cara and Emily Dessoye, Ford and Owen are tasked to become their bodyguards with Ford watching the temperamental and outspoken Cara and Owen the far more amenable and kindhearted Emily. Ford and Cara clash time and time again, with Cara unable to understand why she needs to be saddled with a bodyguard and Ford seeing Cara as nothing more than a spoiled rich girl with too many vices. Yet there's a thrum of awareness between them but could the distraction cost them?

There was a whole lot of hating going on in this book, and to be honest, I couldn't really blame Ford. Cara was, for all intents and purposes, really difficult to like. She had a privileged upbringing, but unlike her twin sister who gave back to society, Cara was far too self-involved and didn't really seem to have any sort of motivation to do anything other than party, get some sort of high, and drink to her liver's dismay. So yeah, I wasn't a fan, and I was beginning to worry considering I had reached the halfway point and I hadn't seen any redemption in sight. Fortunately, she did soften a tad, and I'm curious to find why she is the why she is, especially given the nugget of information Emily gave Ford in the book. And yes, this DOES end in a cliffhanger, not that finding a cliffhanger at the end of this book was surprising, but holy crap, the ending itself shocked the heck out of me! I did NOT see THAT coming, and now I'm all curious about what is actually going and if I had missed any clues. I'm also frustrated because July seems SO far away; now book two is on my anticipated reads list for the second half of 2019. Four stars for The Assignment. ♥