Review: The Trouble with Love by Claire Contreras 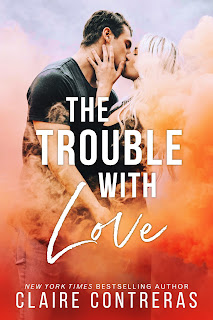 The Trouble with Love is the latest novel from bestselling author Claire Contreras and it tells the story of a couple who engage in a one-night stand and end up crossing paths again a year later...as boss and employee! Okay, maybe not like the absolute boss since that distinction belonged to his father, but to complicate matters, Morgan Tucker realizes that Bennett Cruz is her older brother's best friend. The chemistry they shared a year ago remains a clear and present danger given that neither one of them can really afford to act on it, not with this being Morgan's dream company to work and not with Bennett refusing to stir any trouble with his best friend, Devon. But when Bennett's dad--who is ultimately Morgan's boss even though Bennett owns the company--encourages Morgan to test out her dating app within the Seven office, Naturally, she'll need to sign up in order to take note of whatever needs tweaking, but getting matched with someone comes as a pleasant surprise. Maybe it's the hot tech geek in Development named Wesley. It certainly couldn't be Bennett, right? There's just no way fate--or her app's algorithms--would do that because their match would light a fire that neither one of them may be able to put out.

I'm feeling a teeny, tiny bit torn about this book. There's no denying that it's a creative take on the falling-for-your-best-friend's-sibling trope, what with Morgan and Bennett having the one-night stand without knowing who the other one was in Devon's life mixed in with the working in the same company and then the whole app matchmaking setup. I liked both Bennett and Morgan, albeit I may have liked Bennett more than I did Morgan since she had a tendency to be both contradictory and reactive. Maybe it would have helped not knowing that Bennett and Morgan were indeed matched through the app, a fact that was clearly stated in the blurb for the book. The element of surprise was gone and you're pretty much just reading the message exchanges between the two of them knowing who "Owl" is to "Robin" and that negated any feeling of anticipation, which I actually missed.

Then there are the supporting characters, and while I knew that Presley Rose and Nate Bradley's story was told in The Consequence of Falling, I had this weird feeling that I should have known who Devon and Nora were as well as Jamie and Tucker and the story of these two couples. There were a number of times where I had to stop reading and wrack my brain, trying to recall if they had been featured prominently in any of the other books penned by the author or if their story was told in one of the four books of Contreras's that I had yet to read (Catch Me, the Contracts & Deceptions duology, and Fake Love). It was kind of frustrating and distracted from Morgan and Bennett's story, but at the end of the day, I did enjoy reading The Trouble with Love, which is why it gets four stars. ♥

Purchase The Trouble with Love on Amazon.