Review: Out of the Shade by S.A. McAuley 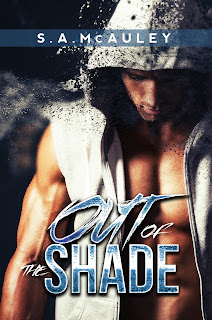 I know that what I'm about to say may lead to my fellow M/M romance readers out there to shake their heads at me in disbelief--at possibly even disgust and/or pity--but... Out of the Shade was my first ever S.A. McAuley read. I know, I know! It's sad, but hey, better late than never, right? I've also finally realized why McAuley has the following she does and why there were quite a few readers out there who were anticipating this newest standalone from the author. This is angsty and heavy read and McAuley does include an advisory for potential readers regarding the themes included in the book that could be triggers for some--alcoholism, sexual and physical abuse, drug addiction, rape, attempted suicide, violence, homophobia, closeting--although most are mentions rather than explicitly detailed events that occur while the story is ongoing, but do consider yourselves forewarned.

There are only two things that matter most in thirty-three-year-old Jesse Solomona's life: his family and his friends, the latter known as the Kensington Boys. But as close as he may be to them, there are things he's kept from all of them, but it's one in particular that he fears may force them to alienate him and that's Jesse's bisexuality. Maybe if he continues with his lackluster job, playing of football with his mates, and drowning himself in alcohol, he can get away with keeping a vital part of himself stuck forever in the closet...and then he meets photographer Charles Dunn. Chuck seems to be the opposite of Jesse; he also doesn't hide his sexuality. He's comfortable in his own skin while Jesse is crawling underneath his. The two men click and the connection they share has Jesse breaking his long-held, self-imposed rules, but is Jesse prepared and willing to confess all to his family and the Kensington Boys?

It took a while for me to click with both the story and the characters in this book, although that's not to say that neither one caught my interest or held my attention. I just like being able to connect with at least one or the other when I'm reading within the first few chapters, and here, it took quite a few before I felt as if I could really lean back, get to know the main characters, and fall in love with the story they had to tell. Quite a number of the guys from Kensington were irritatingly immature--and that included Jesse in the beginning but he grew on me and I did empathize with the struggles that he had in his life. Chuck was easygoing and easy to like, and he had a particular amount of depth to him early on while Jesse was a character who developed slowly but surely as the story moved forward. While Out of the Shade may be my first read from S.A. McAuley, it certainly won't be the last. Four stars. ♥

Pre-order Out of the Shade on Amazon | B&N | Kobo.