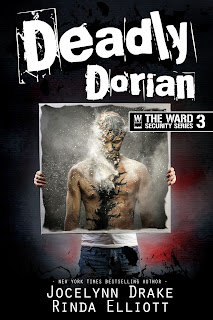 Note: This ARC was provided by the authors via Indigo Marketing & Design in exchange for an honest review.

Royce had never felt this connected to anyone. Not even Michael. That revelation felt so utterfly profound, it froze the breath in his lungs.

This beautiful man was going to break what was left of his shattered heart.

I refuse to try and remember what my life as a reader was like before I discovered the writing duo of Jocelynn Drake and Rinda Elliott via their Ward Security series. I know they have another series, Unbreakable Bonds, from which the Ward Security series was spun off of, and that's definitely one of my top to-be-read books, but can I just reiterate the awesomeness that is their tandem? My third read from them--which also happens to be the third Ward Security novel--simply had me giddy with delight. It's as if my entrusting them with my time is paid back in full and then some because not only did I get an M/M romantic suspense novel that I was able to sink my teeth into, but I've become even more curious and invested in the team that's led by Rowan Ward, whose own story was told in Torch, the third Unbreakable Bonds book. I so need more from these two authors!

Deadly Dorian is the story of twenty-eight-year-old art dealer and gallery owner Marc Foster and thirty-five-year-old Ward Security expert Royce Karras. When Marc's beloved Porsche crashes after his brakes refuse to engage, he knows it's time to reach out and ask for help. After all, this is the third time someone's made an attempt on his life. Royce is brought in to be his bodyguard, but because Marc suspects those closest to him, pretending to be the younger man's boyfriend will allow him to be far more up close and personal. This, of course, becomes a two-edged sword, given that the attraction between both men is stronger than anything they've ever had with anyone else. Royce is all too aware that he and Marc are a highly imperfect match, but Marc wishes that while the relationship between them is fake, the feelings are real. But when someone comes along to remind Royce of his hidden past, the more aware he is that he and Marc don't belong together. Will Royce be able to make sure that Marc will be physically safe and sound even if it may mean breaking both of their hearts?

Romance? Check. Sex? Check. Mystery? Check. Suspense? Check. All of that plus freakishly fabulous writing and two main characters with enough tension and chemistry to convert even the most skeptical of romantics? CHECK, CHECK, CHECK!!! I know playing favorites is often frowned upon, but I don't care. This book is my favorite in the series so far, and the fact that this and the two previous Ward Security novels can be read independently of one another is a mere bonus. Just when I thought I had figured out who wanted Marc snuffed out, I'm thrown for a loop twice over. Then there was Royce's past, which could have muddled things up, but given the way Drake and Elliott handled things, simply made an already fantastic story even better. The pace was quick but not overly so, and everything from chapter twenty-two onwards had my poor heart thumping erratically in my chest. Have I mentioned this is my favorite in the series? Deadly Dorian garners five-plus stars. ♥