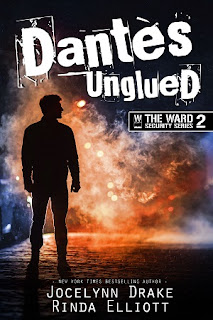 The writing duo of Jocelynn Drake and Rinda Elliott certainly doesn't disappoint, making sure that Dantés Unglued, the second novel in their Ward Security series, spun off of their widely popular Unbreakable Bonds series, which is currently sitting atop my to-be-read list, packs nearly as much of a punch as its predecessor, Psycho Romeo. Here we've got thirty-one-year-old Shane Stephens, a private investigator tasked to locate and identify the hacker who's decided to make the mayor of Cincinnati their target, threatening him to the point of alarm morphing into actual fear. As part owner of the Merleau Detection Agency, Shane knows this case could put on their firm on the map, but he isn't exactly equipped with the computer skills or information technology know-how to go after the hacker. He reaches out to Ward Security and is given twenty-four-year-old IT specialist Quinn Lake to help out. Working together is a given, but Shane is also attracted to Quinn. One month together as partners and lovers, but when their investigation and their affair evolve into far more than they were expecting, everything could come unglued.

Two books in and I'm still asking myself how the hell I've missed out on the tandem of Drake and Elliott. Once again, they drew me in with a story that was chock-full of suspense, mystery, romance, and sex that was anchored by an intense cast of characters led by Shane and Quinn. This had a different feel from the series starter, yet it still felt very much part of an ongoing series. I know that may sound weird, but while this second book stood out from the one before it, you knew that it was part of the Unbreakable Bonds slash Ward Security world. There's a clue in the title itself when it comes to the mystery suspense aspect of the story. I'm tempted to keep my mouth completely shut and have you figure it out on your own, but I will give you a teeny, tiny clue--think classic literature. I'm even more determined than ever to work my way through the original series (I have all those glowing reviews on Goodreads to thank for that!) and trying to be patient for the release of book three in this awesome spin-off. Dantés Unglued is a five-starred standalone, but I recommend you read the two books in order! ♥