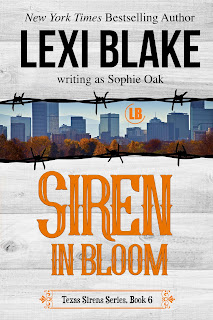 From the moment I found out that the sixth Texas Sirens book was going to have not just one but BOTH Meyer brothers, I was counting the days before I could get it in my hands. A menage romance involving siblings could go sideways really quickly when, but this was Lexi Blake after all, and if it's one thing these past couple of years has shown me, it's that the woman knows what she's doing and she's yet to go for what I call the quick fix, which is basically using the same worn-out story line that romance readers have encountered again and again and AGAIN.

When Shelley McNamara pushed Leo Meyer away fifteen months ago, she didn't really have much of a say in the matter. She broke her own heart as much as she did his, and when he can barely seem to stand being in the same room as her more than a year later, she realizes it's time to move on. Exploring her sexual needs and wants seems like a good place to start, but when she finds out that the Dominant assigned to her is none other than Wolf Meyer, Leo's younger brother, everything is about to become far more complicated than all three ever expected.

Siren in Bloom has tied Siren Beloved as my favorite in the series so far! I loved how this was a novel about second chances, not just between Shelley and Leo but between the two brothers as well. My heart went out to Wolf most because the guy had everyone else's happiness in mind, and while his methods may seem unconventional, the fact that he was willing to push rather than prod when necessary, even if it may not have been welcomed at first, earns him even more bonus points. As always, the romance and suspense were in full force here, and this gets five stars. ♥