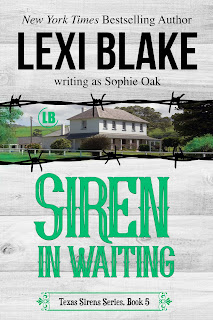 Siren in Waiting is the fifth addition to the Texas Sirens series from bestselling author Lexi Blake writing under her Sophie Oak pen name. Trevor McNamara was a gifted athlete who squandered his opportunity to become a star in sport of football. He left his hometown of Deer Run, Texas the golden boy and returns as a man who is tarnished thanks to his own excesses and having taken his blessings for granted. He cut a lot of ties when his cocksure attitude got the better of him years ago, and that included his ties to Bo O'Malley, a young man who cherished his friendship with Trev, only to be rejected later on. But before he can even try and make amends and prove to Bo that he was wrong, Trev meets Bethany Hobbes. Nicknamed "Mouse" by more people in town that she'd like to admit, Bethany has always had loved Bo. Unfortunately, Bo has made it clear to hear that he's not as smitten with her as she is with him. Trev, however, does have a connection with Bethany. Not only does he refuse to call her by her nickname, but Trev treats Bethany like the question that she is. Will it take losing his best friend Beth for Bo to realize that the time has come for him to either put up or shut up when it comes to the woman who own his heart.

This was quintessential Sophie Oak-styled storytelling, and obviously I love how the stories have unfolded since I'm rather addicted to this series plus the author's other series, Nights in Bliss, both of which happen to have characters who crossover between each other while also making appearances or are merely mentioned in Blake's other series. I liked Bethany and Trev, especially when the latter made it a point to NOT call Bethany by her nickname of "Mouse". Now, as much as I liked them, I admit that it took me a good, long while before I actually saw them as a couple with a connection or any sort of chemistry. When it comes to Bo...well, suffice it to say that I wasn't a huge fan of his for a good portion of the book. He may have secretly had feelings for Bethany, and he may not have meant any harm by calling Bethany "Mouse" but he was too complacent about his standing in her life, and the fact that he couldn't even tell how disparaging that nickname was, thereby continuing to call her by it, had me shaking my head. However, while Siren in Waiting wasn't my favorite among the Texas Sirens that have been re-released so far, I did like the last latter half of the book, and I did end up enjoying myself. I'm giving this four stars. ♥