Cover Reveal: Headstrong Like Us by Krista & Becca Ritchie 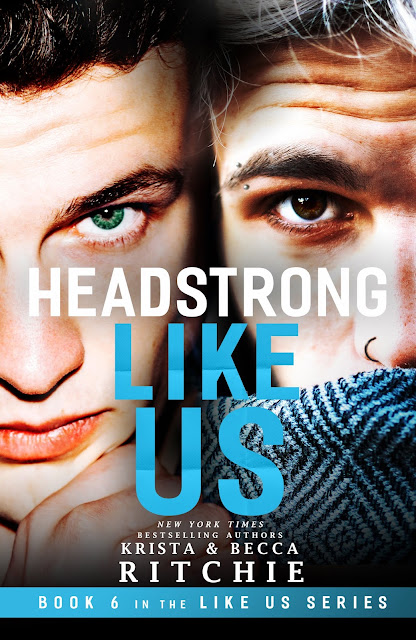 About Headstrong Like Us
You’re cordially invited to the wedding of Maximoff Hale & Farrow Keene, and according to Celebrity Crush—the ceremony for this American prince and his tattooed bodyguard is going to be the event of the century.

There will be no wedding crashers.

Including but not limited to: hateful people, rabid fans, nosy paparazzi, and other so-called media.

There will be no drama.

None whatsoever. Because when you put three famous families and their hot bodyguards together, nothing will go down.

There will be no fighting.

No brawls, fists flying, verbal slingshots, or rifts that tear into craters. Lovers only!

Everything will be perfect.

Nothing will go amiss during the happiest, most anticipated occasion of the year. But then again…

They don't call it the Hale Curse for nothing.

The Like Us series is a true series, one continuous timeline, that follows a family of wealthy celebrities and the people that protect them.

About Krista & Becca Ritchie
Krista & Becca Ritchie are New York Times and USA Today bestselling authors and identical twins—one a science nerd, the other a comic book geek—but with their shared passion for writing, they combined their mental powers as kids and have never stopped telling stories. Now in their twenties, they write about other twenty-somethings navigating through life, college, and romance. They love superheroes, flawed characters, and soul mate love.