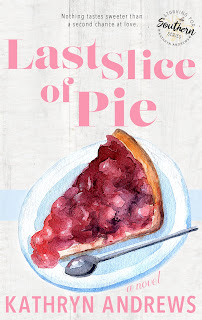 I have been waiting for the second novel in the Starving for Southern series ever since I finished reading Chasing Clouds, which is NOT part of the series but it IS a companion novel, just a little over a year ago, and goodness gravy (totally made that up right now), did Kathryn Andrews make the wait for Last Slice of Pie more than worthwhile. Now, technically, you can read book two without having read the aforementioned companion novel or the series starter, The Sweetness of Life, but there are recurring characters, and I for one, adored both those books, so I'm going to go ahead and highly recommend you read them. Whether you choose to do so before or after reading Last Slice of Pie is totally up to you; just make sure you read them so that you don't miss out on the awesomeness.

Is ten years too long of a time to hold on to unrequited feelings over a first love? What about when it comes to returning to a first love and finally laying all your cards on the table and letting them know that maybe, possibly, absolutely the feelings were never really all that unrequited? Such is the state of affairs of our main characters, pie maker extraordinaire and all-around genius behind Firefly Kitchen Lexi Jarvie and superstar quarterback leading the Tampa Tarpons to the coveted world championship Bryan Brennan. She stayed in their hometown of Oakwood, Florida and he--alongside her brother, James--left for greener Floridian pastures, neither one of them looking back. After a decade of staying away, Bryan's back. Does he think he can have his pie and eat it, too, and will Lexi let him?

I adored every single bit about this book! The bar was set high by both The Sweetness of Life, which was my first-ever read from Kathryn Andrews, and Chasing Clouds, and Last Slice of Pie passed it with flying colors and then some. Lexi and Bryan and their story gave me all the feels--from the aahs and the oohs as well as the ughs and the grrrs--and I love it when a book is able to elicit those from me because then I know I'm all in. I wanted to see these two FINALLY get their happily-ever-after, even though there were times I seriously didn't agree with their actions, because they deserved it. Kudos to Andrews for not taking this story down the same ol' worn path others have. She gave it her own creative touch, allowing it to stand on its own merit. I highly recommend this five-starred read. ♥

Read my reviews for the Starving for Southern series:

The Sweetness of Life (book one) - five stars - My Review