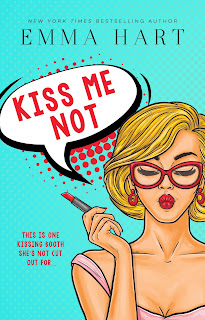 Emma Hart never fails to add a whole lot of sass when it comes to her female main characters, and Halley Dawson is Hart's latest incarnation of a woman who refuses to let anyone get in the way of whatever she wants in Kiss Me Not, the first in the Kiss Me series. Halley is the reigning kissing booth champion, and she has no plans of relinquishing that title to anyone any time soon. She doesn't expect, however, for her newest competitor to turn out to be her most formidable. Preston Wright may be her brother's best friend but he also happens to be the bane of her existence--and her longtime crush, but loose lips sink ships or in Halley's case, her secret getting out may end up in her heart sinking. She's been at this whole crush thing since she was sixteen and she knows all too well that Preston is way out of her league, but now he's ventured into the one place where she's reigned supreme for four years. So what if he's a temptation that's only six feet away and blocked by a curtain? Her lips are ready and waiting and she's prepared to do a whole lot of kissing. But what if the only lips Preston wants to kiss are hers?

This series starter was every bit as cute as I expected it to be. I really liked the connection that Halley and Preston shared, with the whole love-hate thing going on since they were both so into each other and had been for years but not really doing much to acknowledge said feelings. There was snark and sass just like there was sweet and sexy, and let's not forget a healthy dose of humor as well. More often than not, Emma Hart is the sort of author that will rarely disappoint her readers once they pick up a book that she's penned. This new book is the first in a new series and sets things up nicely, keeping most of the focus on the main characters, Halley and Preston, while giving readers peeks and glances at the rest of the cast so as to stir up interest and curiosity as one book ends with a happily-ever-after and the series moves forward to the next couple. This is the sort of romance read that will make you want to curl up in your favorite reading spot and spend two or so hours getting to know Halley and Preston and falling in love with their tale right as they fall in love with each other. I'm giving Kiss Me Not four stars. ♥

Purchase Kiss Me Not on Amazon | Apple Books | B&N | Kobo.