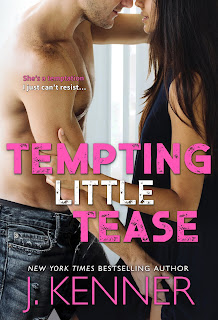 Tempting Little Tease is the fourth book in the Blackwell-Lyon series from bestselling author J. Kenner and it features a falling-for-your-best-friend's-sibling trope. When Leo Palermo's best friend, Brody Carrington, asks him for a favor, the last thing he expected was to be asked to pretend to be the man's younger sister's fiancé. Even curiouser is the fact that it was said younger sister who asked her brother to ask Leo. It's been years since he last saw Samantha Watson, but when he sees just how much she's grown up, he isn't too sure agreeing to be her fake fiancé at a destination wedding was a good idea. Sure, Leo knows that Sam simply wants to show her ex-boyfriend that she's moved on just as much as he is, but this older version of Sam could be far too tempting for even someone like Leo to resist. Is Leo willing to break his promise to his best friend to be with this teasing temptress?

This was a good read and it's my favorite in the series so far. I liked the dynamic between Leo and Sam, and how it was pretty clear from the moment they saw each other after years of being absent from one another's lives that they had connection. I seriously adored Sam, especially she was a woman who knew what she wanted and went after it with determination and maybe a wee bit of sneakiness. Then there was Leo who was a guy who had convictions and was willing to put his heart and friendship on the line if it meant having a shot with the woman he was falling for. Thank goodness this book didn't have a whole lot of unnecessary drama-rama because as much as I love angst, I prefer the kind that's integral to the book, not thrown in wherever. I'm excited for Brody's book as the series moves forward; but for now, allow me to bask in the good read that is Tempting Little Tease. It gets 4.5 stars! ♥