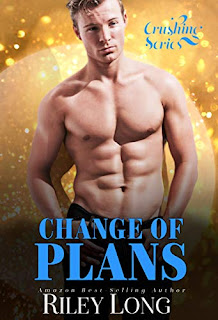 Riley Long is a new-to-me author and Change of Plans was my first-ever read from her. This book also happens to be the first in the Crushing series, and it's the story of two dancers and close friends on the same concert tour who develop feelings for each other. Jared Costa and Corey Miller are on tour as back-up dancers for an up and coming pop singer. More often than not, they're pretty much in sync on stage, but openly gay Jared's been harboring a crush on Corey, who is very much straight. But then, even if Corey wasn't straight, becoming involved--romantically or sexually--is something neither one of them can afford. They're dance careers are their top priority. And again, Corey is as straight as an arrow. Or maybe not. Jared has no idea that Corey's been attracted to guys before, but it's a fact that Corey hasn't divulged to anyone. All it takes, however, is one drunken kiss for them to set aside whatever worries and doubts they may have. After all, they're going to keep things casual, especially since Jared doesn't do relationships even if Corey does. They've already got plans set...but then, who says plans can't change?

I liked this friends-to-lovers story, and while I know that some have labeled this a GFY (gay for you) romance, the fact that Corey isn't as straight as Jared thinks negates that label for me. Things get off to a somewhat slow start, but once the whole kissing incident happens, the story speeds up by a couple of gears. Both Jared and Corey have their issues and insecurities that hinder the absolute forward trajectory of their relationship. There's quite a bit of lack of communication plus some not-so-baseless assumptions (but assumptions nonetheless, and you know what they say about making assumptions). But then Jared and Corey aren't flawless creatures, which makes them far easier to relate to. I actually liked seeing them figure themselves out as individuals if they had any hope of truly becoming a committed couple. There's quite a bit of lightheartedness to the story, but there's also enough angst to satisfy the angst addict in me. As a series starter, this book worked well, although I honestly have no clue if the next book involves people we've already met here or not. Either way, Change of Plans was a fab four-starred read. ♥

Pre-order Change of Plans on Amazon.