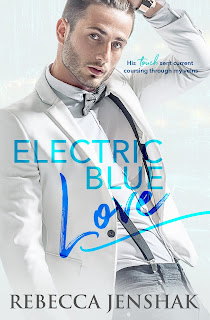 Bianca was the first person I'd ever connected with who had a happy, functioning family life and that part of her made my dark feel darker, but all the good, all the light she brought outweighed the dark and I found it was worth it to be uncomfortable when I was near her.


I already knew Rebecca Jenshak was a noteworthy author, thanks to her four previous titles that I've had the pleasure of reading (the three currently available novels in her Smart Jocks series and If Not for Love, all of which I've read in a span of five months), but her standalone from 2018, which I only read today, is a standout, making it one of my top reads for this year and one that I would readily recommend to any romance reader out there. Electric Blue Love had originality and creativity without sacrificing any of the other elements that make a romance what it is. This goes beyond tropes and what-have-yous. It is, simply put, one of the most memorable love stories I've ever been privileged to read, and that's saying something considering how long I've been reading romantic fiction and all its sub-genres. And yes, that's basically me also saying, I'm kinda-sorta-maybe old...ish. Just saying...

There is never anything good about being stuck in coach, no matter how long a flight may be. But when Court Adams turns to find the girl in seat 8B seriously reading a magazine article about how to get out of the friend zone, he realizes that maybe being in coach isn't such a bad thing after all. Maybe it's the fact that Bianca Winters has the most mesmerizing electric blue eyes he's ever seen or the earnest way in which she listens to him. So, why not be a good guy and steer her right, becoming a mentor of sorts as she tries to snag the less platonic attention of her college crush? When Court and Bianca star friendship through text messages and phone calls, neither one is ready to acknowledge the chemistry between them. After all, could a thirty-four-year-old financial risk adviser who steers clear of commitment and a twenty-two-year-old college senior who believe in happily-ever-afters ever truly have any sort of relationship beyond friendship? But can a connection as electric as theirs be really denied for too long?

Here's the thing: the blurb gives just a hint of what truly goes on between the covers, and this is one of those cases where going in blind is actually a good thing so as not to jump to any conclusions as to what the book is about. Of course, when I first came across the title, I did read the blurb, but by the time I finally got around to reading the book, I'd forgotten what the blurb had said in the first place. I loved every single thing about Court and Bianca's story: from their first meeting to the friend zone mentorship to their unlikely friendship and then on to more. This was well-paced, allowing readers to get to know more than just the essentials and basics about Court and Bianca while they got to know each other better. I loved how family played a part in the story, especially on Court's end because it was far from the usual. It's the weekend--do yourself a favor and read Electric Blue Love. Five-plus stars. ♥