Review: I Hate You by Ilsa Madden-Mills (The Hook-Up #3) 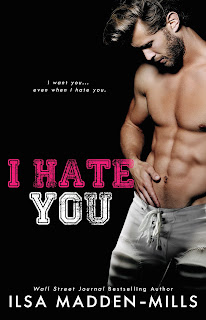 She wanted to stay. She wanted me to ask her to stay and see where it went.

My heart belonged only to me. It had to.

Everyone leaves me. They always do.

And football is first. It has to be. It's all I've had that felt right.


I've loved reading the first two novels in Ilsa Madden-Mills's The Hook-Up series, but it's book number three that's swooped in and stolen my heart. I Hate You is an enemies-to-lovers romance between former hook-up partners and college seniors Charisma Rossi and Blaze Townsend. They may have only gotten together three times, but they were three of the most unforgettable intimate moments either one has ever had. Or at least that's what Charisma thought until Blaze ended things between them...in public...during a party in her sorority house. Fun times. Three months have passed since then, and neither Charisma nor Blaze have seen each other since their non-break-up (because theirs was a non-relationship). They've moved on, right? So, why is it that as hurt as Charm may still be, she continues to be drawn to him, and even though he was the one who ended thing, Blaze seems intent on working his way back into her life? Neither one was the other's type, and Charm has her rules while Blaze's focus is only football. Given a second chance to get it right, will Charm entrust Blaze the very heart he already broke once?

Oh, how there were a myriad of conflicting emotions simmering between Charisma and Blaze for a lot of this book! I understood why Blaze felt the need to end things with Charisma. Did he go about it the right way? No, although I'm pretty sure that regardless of how he went about it, she would have still ended up with her heart getting broken. No one likes being rejected, and with the insecurities that these two were already dealing with due to certain things from their past, it almost felt as if heartache was going to happen regardless. You know that saying about not knowing the value of something until you no longer have it? That's what I had in my head while reading this book. Sure, Charm and Blaze originally got together because of the physical connection, but I think that what scared both of them was the fact that the connection shifted into so much more in such a short period of time. There's a lot of one-step-forward-two-steps-back that goes on, but I cheered these two on and I just knew they were going to get their acts together. I absolutely adored Charisma and Blaze! I love you, I Hate You. Five-plus stars. ♥

Read my reviews for the Hook-Up series:

Purchase I Hate You on Amazon.