Review: Kept in the Dark by Charlie Cochet (Locke and Keyes Agency #1) 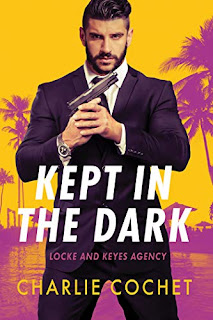 A brand-new series from Charlie Cochet?! Yes, please! From the moment I started reading her THIRDS series, I was hooked to this author's writing. Her brand of romance and suspense strengthened only became even more irresistible to me by way of her Four Kings Security series and the wonderful humor she injects in her stories showcased in her Beware of Geeks Bearing Gifts novella. I've gone on to fall in love with the audio editions of these books that I've read, and now here she goes, starting a new series, and I think it's safe to say that I am now officially addicted to all things Locke and Keyes Agency, which she starts off with Kept in the Dark. This had an enemies-to-lovers slash second-chance romance feel to it along with a whole lot of suspenseful and sexual tension.

A botched assignment in Vienna, Austria finds CIA officer Caiden Cardosa no longer in the field, playing desk jockey back in the US instead. Two years have passed and that feeling of listless lingers. When Caiden receives a phone call from an unlisted number, he doesn't quite expect it to be the opportunity he's been waiting for--the opportunity to finally get answers and find out who set him up two years ago. Another thing he didn't expect? To be partnered up for this mission with Álvaro Montero--the same Álvaro Montero whom he shared an unforgettable night with only to be ghosted. But Álvaro doesn't exist anymore after being "killed". Rescued by the mysterious Alpha Orion, the former Army Ranger turned assassin is now known simply as "D", and just like Caiden, he wants to know who ordered him dead. The mission is dangerous, but not as much as falling for someone who betrayed you.

Fabulous writing? Check. Enticing main characters? Check. Intriguing story line? Check. Curiosity about the rest of the cast? Check and check. This was a book that felt like it was a gift that kept on giving, and I've got a suspicious feeling that's how the rest of the series is going to turn out. There was no denying the spark between D and Cade, but I loved that it took some time for them to get past the distrust. I pretty much figured out who the "bad guy" was, but Charlie Cochet makes you want to stay the course because it simply isn't humanly possible to be swayed away from a Cochet romantic suspense read! Kept in the Dark gets five stars. May I have book two now, por favor? ♥

Purchase Kept in the Dark on Amazon.