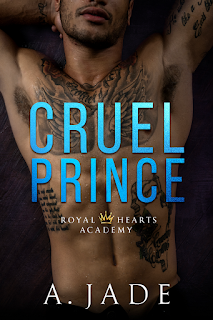 Cruel Prince is the first novel in the Royal Hearts Academy series penned by A. Jade, the pen name for author Ashley Jade, whose writing I discovered earlier this year by way of her Devil's Playground duet. This new book may have high schoolers for its main cast of characters, but the material itself is more new adult (NA) than it is young adult (YA). The author does note that mature themes like graphic language and sexual content play out in the series, so if you're expecting hearts and flowers and the innocence of first love, you're going to need to look elsewhere. However, if you're a fan of the bully romance trope with an asshole for the male main character and female main character who isn't about to roll over and take what her bully throws her way, then this one's for you.

Once upon a time, Jace Covington was Dylan Taylor's best friend. They were each other's pillar of support, having experienced the pain of loss. Theirs was a bond that nothing and no one could ever break, and it seemed like they were meant for so much more than "just" friendship. Then, Dylan leaves Jace behind, with four years passing before she returns. Living with her aunt and uncle, she's back to finish her senior year in Royal Manor High. When she see Jace again, he's nothing like the boy she remembers. That boy from four years ago may have been the person who knew her best, the one with whom she shared her first kiss, and the friend who became her first love; but the young man before her now makes it clear that the last thing he wants is to breathe the same air as Dylan.

Ah, the thin line between love and hate is barely a sliver when it comes to Jace and Dylan. These two share a great deal of history with each other, and while there was so much good, the lingering and lasting memory is the last one--that of Dylan abandoning Jace, or at least, that's how he saw it. With how cruel Jace tended to be towards Dylan, I seriously begged that he have some redeeming factor before long or else. This was the boy I loved to hate, but I also knew that there were many layers to him--that he was more than just the bully tormenting the girl he once loved. There was this intensity between these main characters that made me sit up and pay attention as they struggled with their barrage of conflicting emotions. Cruel Prince is a five-starred heartrending read. I need more! ♥