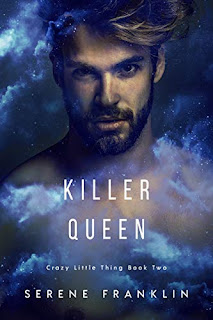 Killer Queen was a killer read, with an enticing story of two strangers turned roommates who go from one hook-up to a no-strings-attached roomies-with-benefits arrangement. This is the second novel in Serene Franklin's Crazy Little Thing series, and it does hold up well as a standalone, although I'm recommending you check out the first book, Princes of the Universe, because of recurring characters AND it was a good read as well. If you're new to Franklin's writing, this book is a good starting off point, although she's still a fairly new author and currently "only" has four novels for readers to choose from, and I've read--and liked!--all four, and they do read well as standalones.

Here we have thirty-one-year-old computer programmer Macalister Thomas Buchanan, aka Mac, who finds himself living alone in his apartment ever since his best friend moved in with his now-boyfriend. He does end up with a new roommate, however, in the form of the younger brother of one of their friends--nineteen-year-old Irish college student Dubhlainn Ó Donnghaile, whom Mac nicknames "Dove". While Mac may be gregarious and outspoken, his new roomie is far quieter and more sullen. He also seems to hate Mac, which doesn't compute for Mac since he finds it impossible to believe anyone would hate him. But it all takes is one discovery for things to change between the straight older guy with a reputation of hooking with girls often and the gay younger guy who knows better than to hook up with someone who doesn't swing his way no matter how hot the guy may be. Right?

Four novels in and Serene Franklin has shown growth as an author. I loved the connection that Mac and Dove shared, going from strangers to roomies to friends and fuck buddies and then more. The evolution of their relationship fascinated me, especially given that they were such opposites in terms of personality. I know that some have pointed out that Mac and Dove's decision to be in a non-relationship that allowed for being with other people in the beginning was a turn-off, but I think that it brought a more realistic element to their story. These two had to figure out what they were feeling towards each other. Mac's suddenly not-so-straight sexuality wasn't as big of a hurdle to what was brewing between as I'd expected, which to me was refreshing. Five stars for Killer Queen. ♥

Read my reviews for the Crazy Little Thing series: