Review: Saved by Him by Kristie Leigh (Like a Hurricane #2) 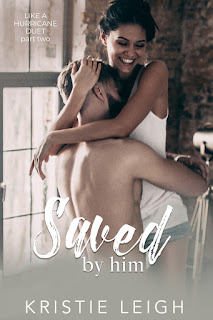 Saved by Him is the second and final part of the Like a Hurricane duet from Kristie Leigh, and I'm happy to say that it was a step above its predecessor, Wrecked by Her, which basically had me not liking the female main character one little bit. Book two picks up where book one left off, with Julianne Davis announcing her plans of leaving after the passing of her beloved mother and Hunter Rivers walking away from her in frustration and anger. Jules believes returning to California with her son, Calum, will allow her to properly grieve in peace without all of the memories of her mother bombarding her. Hunter sees Jules's decision as her doing what she does best: running away rather than facing her issues. Everyone tells Hunter to confess to Jules that he still loves her, believing it'll help her decide to stay in their Floridian hometown, but he's already had his heart shattered by her once before and he isn't sure if he'll survive if she does it again. For so long, Jules has felt lost, but maybe she'll realize she's already found her way back home if only she can open her eyes--and her heart--to a second chance at happily-ever-after with her Hunter.

Once again, Hunter is still the best thing about this book, although this time around, that honor is shared with two-year-old Calum. It took a REALLY good, long while for me to feel something other than dislike for Jules. I swear, the girl was wishy-washy and had a streak of immaturity to her that had me shaking my head time and again. However, it was also Jules who underwent the most character development, not only this particular book but in the duet as a whole. Did I love her as much as I did either Hunter or Calum? Honestly, no, but she did a whole lot of growing up and maturing and did own up to her mistakes and made amends, and that for me, was progress. She also happened to be a pretty good mom to Calum, so yeah, Jules deserved to get a break and she may have won me over a smidgen by the end. Kristie Leigh did a pretty good job with the writing per se, although there were moments the story did feel like it was kinda stuck while the main characters decided whether to finally step up or stall out. Overall, though, I did like this second book more than the first one, so I'm giving Saved by Him four stars. ♥

Read my reviews for the Like a Hurricane series:

Saved by Him (book two) - four stars - My Review (posted above)

Purchase Saved by Him on Amazon.