Review: Wrecked by Her by Kristie Leigh (Like a Hurricane #1) 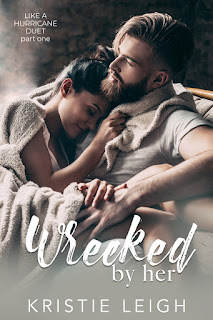 Wrecked by Her is the first book in the Like a Hurricane duet and the debut release of Kristie Leigh, and this is one of those cases where the title truly does speak for itself. Hunter Rivers and Julianne Davis were best friends and high school sweethearts, but while Hunter held out hope that they would make a long-distance relationship work during the four years Jules would be away at college, she didn't, choosing instead to end everything between them and heading off to California, refusing to return for eight years. And then she receives a phone call that has her returning to her hometown with her two-year-old son, Calum, in tow. The reason for Jules coming back to McKinney may not have been good, but maybe this is a chance for Hunter to show her that in all the years that they had been apart, his heart still belonged to her. Jules already wrecked Hunter years before; will she do it again?

Two things: I seriously liked Hunter, and I seriously disliked Jules, and I'm pretty sure I'm not the only one who felt that way while reading this book. Kristie Leigh did an admirable job on this first novel of hers, which filled my angst quota for the day, and I'm saying this even though I wasn't a fan of one of the main characters. Where Hunter was devoted to Jules and the memory of what they had shared together, she left me cold, with an almost callousness to her that rubbed me the wrong way, yet she cites him as being the reason she couldn't come back to McKinney claiming it would be too difficult to see him. Oh, Jules... Insert eye-rolling, head-shaking, and forehead-smacking emojis here. Yeah, still not a fan. But as much as I disliked Jules, Hunter--alongside Leigh's fine writing, of course!--is reason enough for others to check out Wrecked by Her. And yes, it does end in a cliffhanger of sorts. Four stars. ♥

Purchase Wrecked by Her on Amazon.