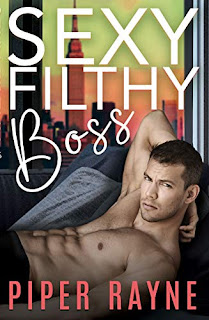 After getting a glimpse of the Mancini brothers--cousins to the Bianco boys whose stories were told in the Blue Collar Brothers trilogy--Piper Rayne launches their series, entitled White Collar Brothers, with the middle Mancini brother's story, Sexy Filthy Boss. There are three about thirty-one-year-old Lorenzo Mancini that you can be sure of: he loves his family, he wants to make partner at the advertising firm he works for (the sooner the better), and he has no plans of settling down with a wife anytime soon. Oh, and he can't seem to keep an assistant for longer than a couple of weeks. When his latest assistant quits and with him pitching to a big potential client for the firm, it's twenty-seven-year-old Annie Stewart who's forced to play double duty, splitting her time between her actual boss and the one ad executive none of the other current assistants want to work with. But Annie isn't like the other assistants, especially when she ends up saving the day by coming up with a great idea for an ad for Enzo's potential client. Paired together for the duration of creating an ad that will not only land the client but get Enzo his partnership and Annie a promotion to junior ad exec, they will need to keep it professional. Easier said than done.

It took some time, but Enzo Mancini ultimately won me over. Yes, he came off as a jerk--totally censoring myself here because I'm pretty sure the word I want to use will get my review rejected when posted on an e-retailer--in the beginning, especially towards Annie, but there was more to him than the ambitious and arrogant ad exec he was introduced as in the beginning of the book. I guess he needed someone like Annie who wouldn't take his domineering attitude without complaint. Nope, what we had here was a heroine who had her own ambitions--although she wasn't as cutthroat as Enzo--and spoke her mind and had no qualms showing that she knew her stuff. She was totally awesome and looked to be a positive influence on Enzo, who actually wasn't a bad guy since choosing to be single isn't a point against someone, male or female. Nope, it was in the office where he had this whole alpha male thing going on, plus the guy needed to learn to go pick up his dry cleaning. But I loved watching these two grow as a couple and how they found themselves on equal footing--as it should be--in the long run. Piper Rayne did a fab job kicking off the series with this fun rom-com, which is why Sexy Filthy Boss gets 4.5 stars. ♥