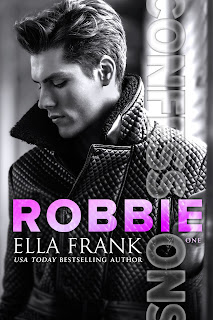 Never could Robbie have guessed how he'd feel in that moment, because he didn't quite believe it himself. But as he knelt there between two men he never could've imagined himself between, he felt as though he'd finally found home.


There was a thrum of anticipation as I awaited the arrival of this book in my tablet, but alongside that feeling was one of anxiousness. After all, Confessions is a spin-off of the much loved and highly popular Temptation series, one that can very much be read independently of each other (though I recommend that you read Logan and Tate Mitchell's love story in those six novels first because the eponymous Robbie is featured quite prominently plus the two other main characters are introduced there as well). You can imagine how high expectations are for this particular trilogy which starts off with Robbie and twenty-nine-year-old bartender Robert Bianchi, thirty-three-year-old renowned celebrity chef and restaurateur Julien Thorpe, and thirty-five-year-old lawyer and partner at Mitchell & Madison Joel Priestly--Robbie, Julien, and Priest, collectively Ella Frank's own princess, prick, and priest.

Now, if you're familiar with my reviews, you'll remember that I have certain reservations when it comes to the three-sided relationship sort of romance. It's extremely rare that I come across one that I'm a hundred percent into. If I had to hazard a guess, I'd say that there are less than ten books which I could name It's nothing against the trope itself, but has more to do with me finding it difficult when an author wants me to believe that the love shared by the three participants in the relationship is equal soon after they form their threesome/triad/throuple, even when two have been in an ongoing relationship to begin with. With Robbie, Julien, and Priest, however, I confess that my expectations included the author ensuring that this wasn't going to be your run-of-the-mill M/M/M story. And you know what? Ella Frank repaid my faith in her by writing one of the best series starters ever.

This is one of those times wherein I won't be going into what the story is about. You've already picked up that it's about three men--Robbie, Julien, and Priest--and if you've read the Temptation series, particularly True, the sixth and final novel, then you know the then-available back story as to how the paths of these three intersected. Let me just say this: I already adored Robbie and his affection for both Logan and Tate Mitchell in the original series, but I loved how he truly began to come into his own here; whatever preconceived notions I had of Priest were thrown out the window because while we don't get his whole story here, he's already made me see that there's so much more to him than his being seemingly cold, calculated, and controlled; and while it's Julien that we knew the least about going in, he's obviously the peacemaker among the three. Robbie is a five-plus-starred must-read confession. ♥