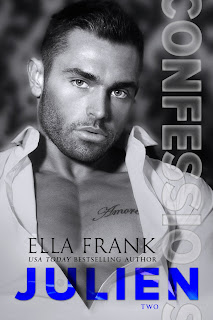 Priest was Julien's line of defense and Robbie was his light and hope, and it had never been more apparent that the connection they had forged was one they'd all been searching for, and one they desperately needed.


Just like its predecessor, Julien was a novel that I was eagerly awaiting. This sequel to Robbie—and the second in bestselling author Ella Frank’s Confessions series—finds my now favorite amorous trio, composed of successful defense attorney Joel Priestly, celebrity chef and restaurateur Julien Thornton, and bar manager Robert Bianchi, confronting ghosts of their pasts. Among the three men, however, it’s Julien’s particular ghost that haunts him day or night. His husband knows the darkest part of his history, and Julien is cognizant of the fact that he owes their boyfriend more than a mere glimpse into his past—to explain why the guilt that weighs upon his heart and soul is one that he deserves. When everything’s been said and done, will Robbie still want to be by the side of a man he lusted over while seeing him on television, or could Julien’s secret end what is just beginning to feel like forever for the prick, the priest, and their princess?

Gah! This book nearly brought me to tears! If I wondered how deep Robbie, Joel, and Julien had gotten in their relationship, this second Confessions novel brought that point home. Where Joel’s (and yes, I’m totally calling him “Joel” now instead of “Priest” because…well…just because) and Julien’s lives were once black and white, Robbie coming home to them was like a splash of color. I’m not saying that meeting, falling in love, and then marrying didn’t brighten each other’s lives, but they had formidable issues to not just hurdle but to move beyond and not constantly be forced to return to. Robbie may have been who they wanted as a third partner, but he’s turning out to be exactly what they needed as well. He’s more like an array of colors that breathed new life into them, the proverbial rainbow after Joel and Julien’s stormy pasts that are still ever-present and now threaten their future with Robbie. Three very different men meant for one lifetime together.

One is good, two is better, but three could very well be best, at least for Joel, Julien, and Robbie. This throuple—do not mistake these three for a “threesome” because they ARE quite committed to their relationship and there’s nothing casual about it—is composed of three varying personalities from varying backgrounds. While I may have been curious about what would become of them after their first interaction in True, and I was fascinated by how they would relate to each other in the Confessions series starter, Robbie, I am now absolutely emotionally invested in them as a throuple and as individuals, although Robbie did have quite a bit of a head start thanks to the Temptation series. Writing M/M/M romances is nothing new, but creating a well-crafted and equally enticing and endearing one, what more a trilogy, is a feat in my eyes, one that Ella Frank has achieved with aplomb. Julien gets five-plus stars; now the wait begins for Priest. ♥