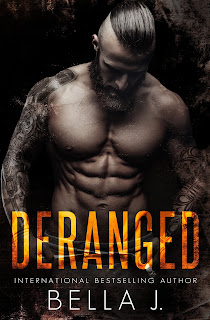 Just when I thought nothing could surpass the first two books in the American Street Kings series, the third one does exactly that and then some. Bella J. takes everything that made Depraved and Defiant great reads and ramped it all up to give readers Deranged. This is the story of Onyx and Wraith--he's the VP of the American Street Kings and the brother of the current president, Granite, while she's an enigma who captures Onyx's fascination and his heart. He may have thought he knew all about what it was like to be tempted, but Onyx has never come across a temptation like Wraith and he's ready and willing to give in. His curiosity gets the better of him, wanting to know every single thing about this woman who has bewitched all his senses. Changes are heading the club's way, and it's Onyx who'll feel the brunt of it the most. Can he afford to be distracted by someone like Wraith, and when the truths he's been seeking on her end come to light, will he be able to handle the consequences and the aftermath?

Prepare yourselves for one hell of a bumpy ride with this third American Street Kings novel! As intense and as undeniable as the chemistry and the connection Onyx and Wraith may have, it comes with a whole host of issues. Naturally, I can't really get into what those may be because spoilers are evil, but what I can tell you is that these two are going to have to work hard towards their happily-ever-after and the read to that HEA is, like I said, bumpy at best. Just like the title, there's that air of madness in this story, what with the feeling of instability, and I'm not only talking about certain characters either. Deranged was a five-star, full-throttle read. Bring on Destroyed ASAP! ♥

Read my reviews for the American Street Kings series: