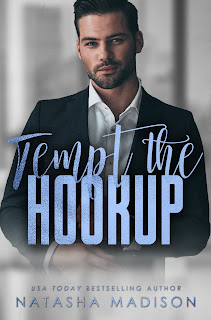 Natasha Madison's brand of romantic comedy strikes a fabulous balance of the sweet and steamy plus wit and humor, and I've yet to read a book of hers that hasn't made me both feeling swoony and smiling myself silly. Her Tempt series is one that I had to catch up on, so I spent the weekend reading the first two full-length novels and listening to the two-part Read Me Romance podcast, and I'm glad I did because I'd obviously been missing out. I thoroughly enjoyed those stories, and they were definitely got me in the mood for the newest addition to the series. Tempt the Hookup is the third full-length novel, and it's a second-chance romance between two people who met and fell for each other during a cruise but went their separate ways afterwards. What neither one of them realized was that while one was taking many great memories, the other had a souvenir arriving nine months after.

Nearly seven years after graduating at the top of his class and wisely choosing to go with Coco and Associates among the numerous law firms vying for his attention, Luca DiMarco is reaping the rewards of all his hard work. His career continues to flourish and he couldn't ask for a whole lot more at this point in his life...professionally. In terms of his personal life, however...well, let's just say that Luca hasn't dated in a really long time--long enough for his closest friends to tease him about it incessantly. But see, Luca's already met the girl of his dreams, and he isn't all that interested in anyone who isn't Eli. So, he's okay with spending his free time with his buddies and work-related gatherings like welcoming back his boss's daughter who's returning to the U.S. after years of living in France with her son. So, imagine Luca's shock when Eliahn Coco turns out to be his Eli from the cruise and her six-year-old son, Aiden, turns out to be...his. Oh, and the clincher? Eliahn and Aiden's new house is located right beside Luca's.

What didn't I love about this book?! There was so much to adore about Luca, Eli, and Aiden. I don't want to give too much away, but I appreciated that there wasn't a whole lot of unnecessary drama and angst thrown into their story. My favorite thing would have to be Luca's relationship with Aiden, and it was one that had a whole lot of ease to it, with Luca taking to fatherhood like a duck to water and Aiden embracing this missing piece of his life without question. I really liked Luca and Eli as individuals and as a couple, and it was obvious why they clicked seven years prior to them seeing each other again. Luca's friends were definitely comic relief, and can I just say that their antics made me appreciate the friends that I have and how they would never do what these guys did to Luca? Well, my friends would never dare it because I'd get back at them times ten. This was a really fun read, one that was about finding love unexpectedly and how fate allows us to find it again and how becoming a family can be as easy or as difficult as we choose to make it. Tempt the Hookup gets five stars, and this can be read as a standalone. ♥