Review: Beyond the Pale by Jennifer Millikin 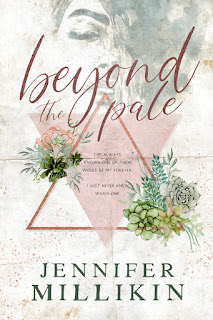 Beyond the Pale is my first read from Jennifer Milkin and it certainly proved to be a rather interesting one, albeit it having been stretched till close to the last minute and to the point where I just wanted to find out if my suspicions were right from the moment I read the blurb (and yes, they were). This was the story of three best friends--Lennon Davies, Finn Jeffries, and Brady Sterling. From the time they were kids, the three of them were tied together by a bond that surpassed your typical friendship. Lennon loved both Finn and Brady, different as the two boys were. Finn was a carefree spirit while Brady was far more careful, but both cared deeply for Lennon. College led them to varying directions--Lennon to Texas, Finn to California, and Brady to Chicago. Eight years later, a pact that the three friends made has led them back to their hometown of Agua Mesa, Arizona. The time has come for Lennon to choose: does she give her heart to Brady or does she offer it to Finn, knowing all to well that whoever she doesn't choose will be left with heartbreak. When choices have been made, will their friendship remain intact or in tatters?

For the record, this is about a love triangle, but it isn't the sort of triangle where one person doesn't know about the existence of another. All three main characters are connected and they do have a truly strong friendship with each other, which is what also makes the fact that the female main character will have to choose one male main character over the other even more heartrending. There's a lot of back and forth on the end of Lennon, and with all her waffling because she says that she loves both Finn and Brady and is wary about having to hurt one's feelings, it took nearly all of the book for her to actually make a decision. I had my suspicions as to who she would actually end up choosing when I first came across the blurb. Let's just say my mind tends to jump from neutral to fifth gear, and there was something about the wording of it that had me putting my bet on one over the other. Funnily enough, I ended up liking the guy that doesn't get chosen just a smidgen more than the one that was, but to be fair, both guys were more than worthy. My one "complaint" would have to be that it took forever for Lennon to choose and when she does, everything felt rushed. Other than that, I appreciated Jennifer Millikin's obvious skill at writing and look forward to reading the book of the one that wasn't chosen soon. Four stars for Beyond the Pale. ♥

Purchase Beyond the Pale on Amazon.