Review: Mad About Moon by Melissa Foster (The Whiskeys #5) 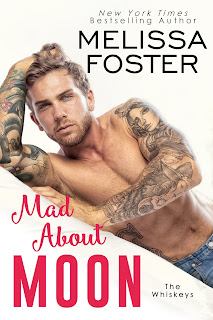 Ooh! Just when I thought I had found my favorite book in the Whiskeys series, Melissa Foster one-ups herself with the fifth and newest novel. Mad About Moon is a story about finding love not just once but twice and having another opportunity to see if the spark two people had years ago still exists. This series has gotten better and better with each novel Foster has released, and book five came THIS close to getting a five-plus-starred rating, but that was due more to personal preference--more on that later in my review.

It's been more than two years since Josie Beckley laid her beloved husband, Brian, to rest, leaving her to raise their son, Hail, on her own. Now twenty-four, Josie and five-year-old Hail are forced to live in a shelter, and it's there that Josie's sister unexpectedly finds her. Reunions seem to be in the cards for Josie because with her sister comes their brother and a host of other people that have become part of their family, one of whom just happens to be Jed Moon. She met him six years prior--he was twenty-three and she was eighteen. They shared one night together and then went their separate ways. Now, their paths cross again.

This book had all the feels, making for a thoroughly great read about how one person can find a first love and a last love and both being true. This was also a story about family, and how those bonds can still exist even if they're frayed from years apart. Melissa Foster is a master when it comes to combining family and romance, and she's done it once again with Josie and Jed's--aka Jojo and Moon's--story. Dare I say that The Whiskeys has become my second favorite series from her? This did come achingly close to scoring a higher rating, but I held back because of a revelation later in the story that I wasn't a fan of. Again, this was a personal preference issue and had nothing to do with the writing itself. So, five stars for Mad About Moon. ♥