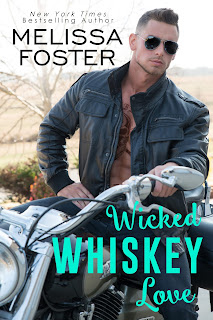 Dem Bones, Dem Bones...Damn Bones Whiskey. Okay, consider this an official declaration on my end: I've finally found my favorite novel in Melissa Foster's The Whiskeys series! I liked the first three books--Tru Blue, Truly, Madly, Whiskey, and Driving Whiskey Wild--but this fourth and newest one surpassed my expectations. Sarah Beckley, who was introduced in the third book, is a single mother who is way more familiar with abuse than one should ever be. From her parents to her ex, she's been treated abhorrently. For the sake of her three children--one of whom is yet to be born--Sarah starts over in the town of Peaceful Harbor with her formerly estranged brother. The concept of family is one that is, unfortunately, foreign to her, but the Whiskeys are slowly but surely opening her eyes to what a real family should be like. One Whiskey in particular is closest to her two kids--Dr. Bones Whiskey--and it looks like he wouldn't mind becoming closer to Sarah as well. But her past has taught her to be wary and the walls around her heart have been fortified over time. Bones, however, intends to prove Sarah's worth fighting for.

Ah, Bones. Le sigh. This man was seriously le sigh-worthy. He's the sort of book boyfriend (although that particular label doesn't sound fitting enough for him) that you swoon over, not because of the words he says to the woman he loves but because of everything he does for and with her. I love stories that involve a single parent because it presents an extra hurdle for the other person to climb over, and let's face it, winning over children of any age isn't always simple nor easy. But Bones didn't even have to try all that hard; he was simply...Bones. For all my praising Bones, let's not forget Sarah! She was a woman who turned her perceived weaknesses around and became this woman of strength. This was a story about family, and I dare say that when it comes to this particular sub-genre, Melissa Foster has become a master. Just like those before them, the Whiskeys are not perfect, but they try and persevere, and at the end of the day, they're there for one another. When I got to the end of Wicked Whiskey Love, I had one very satisfied smile on my face, but that's par for the course when it comes to this great series. Five stars. ♥