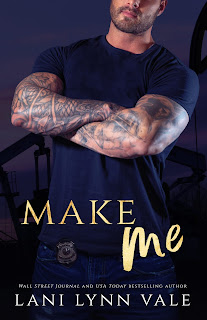 It's official--KPD Motorcycle Patrol is my new favorite Lani Lynn Vale-written series, and no, it's not because these guys wore uniforms that made me think of CHiPs, the hit television show from the late seventies to the early eighties that starred Larry Wilcox and Erik Estrada (and yes, I actually watched the show when I was a kid). We're already on the fourth book, and this series has just gotten better and better, thanks to a strong cast of core characters that belong to the Kilgore Police Department's new-ish motorcycle patrol. That familiar combination of romance, suspense, and humor in only the way Vale can concoct is present, bringing with it the quirky flavor I love.

Twenty-five-year-old Royal St. James may have come from a family with money, but she knows what its like to fend for herself and to be considered as the bane of her father's existence. Her name may make you think she'd be treated like a princess; instead, she's dubbed "Royal" because she's thought of as a royal pain in the ass. And while Justice Rector may agree that Royal has a habit of being, erm, troublesome, he knows she's worth the trouble when he risks his undercover assignment in order to save her from a dangerous thug who has set his sights on her.

Gah! I loved Justice and Royal's story. From the bickering to the banter and all that undeniable chemistry, these two had me entertained from start to finish. They also happened to have the sort of back stories that made them even more interesting to get to know and to see how much they had developed as individuals. I adored Justice's parents (whom I'm guessing have their own story somewhere within the author's back list) as much as I did Royal's brother, Jimmy, another supporting character that I hope will get his own story told someday. Readers also clue in on who's up next in the series and I'm definitely looking forward to reading their happily-ever-after soon. All in all, Lani Lynn Vale more than tickled my fancy and had me as happy as a clam. I'm giving Make Me five out of five stars. ♥

Hide Your Crazy (book one) - four stars - My Review

I'd Rather Not (book three) - five-plus stars - My Review

Make Me (book four) - five stars - My Review (posted above)