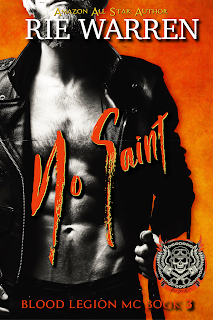 Rie Warren's Blood Legion MC series is proving to be rather addictive. Three books in and the author's writing remains as good as in this third and newest addition as it was in the first two novels. No Saint is the story of Saint Baptiste, an ex-convict and member of the Blood Legion motorcycle club, and Honoré Parrish, a singer and musician and single mother to her seven-year-old son, Caleb. Saint is more than aware that his obsession with Honoré may be seen as unhealthy, and he also recognizes that an ex-con like him doesn't seem like the best choice for a gifted artist like her--however, Saint just can't help himself, even as Honoré tries to resist him any chance she gets. She's over and done with the biker lifestyle and has no plans whatsoever of being someone's old lady, not when she's already experienced it firsthand and refuses to do a repeat. Her life now is all about her son and her music, so why is it that she appears to be fighting a losing battle when it comes to Saint? But just as she decides to take a risk and she and Saint take the first steps in building something, danger and secrets threaten all their lives.

This had all the things I look for in an MC romance: love, lust, action and suspense. I loved that Saint and Honoré were paired together because there was a great push and pull going on, which served as enticing foreplay as well. Honoré was a woman who worked hard for her independence, and her past isn't for the faint of heart. Just like the woman he's wanted from the moment he saw her, Saint is a man who could be the poster child for the school of hard knocks, so while they may not seem like they didn't have a whole lot in common on the outside, these two were perfectly matched and exactly what the other needed even if they didn't realize it straightaway. Of course, readers get the rest of the club and see where the first two couples are at in their own respective relationships. There's also just enough to intrigue readers when it comes to the upcoming fourth novel in the Blood Legion MC series, Get Revenge. If you're familiar with my reviews, then you know I'm pretty much going to recommend you read the series in order. Don't worry, they're all great MC romance reads! I'm giving No Saint five of five stars. ♥

No Saint (book three) - five stars - My Review (posted above)

Purchase No Saint on Amazon.