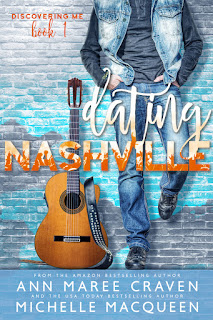 Dating Nashville is the first in the Discovering Me series, and it's my first read from Ann Maree Craven and Michelle MacQueen, whether as a writing duo or as solo authors. Now, when I went into this book, I had absolutely no clue that the new series was actually a spin-off of the authors' previous young adult (YA) series, Redefining Me (The F Word, The N Word, and The C Word), having only realized this fact after I was done reading the Discovering Me series starter and taking note of a whole bunch of supporting characters who appear to have had their own stories told already (which then led me to snoop around Goodreads, and that where I found out about the previous series). So, I was admittedly a tad confused with all these other characters lingering about, but if I had to set that aside and focus on just the main characters, then I am happy to report that they had a really beautiful story to tell.

Dating Nashville is the story of Beckett Anderson, a twenty-year-old straight country music artist whose star is rising, and Nicky St. Germaine, his best friend's gay younger brother who's just graduated from high school. Nicky may be openly gay, but when his on-again, off-again (and very closeted) bisexual boyfriend breaks his heart yet again during a music festival, Becks acts on impulse, stopping in the middle of a concert he's performing in and kisses Nicky in front of the entire audience. That one unplanned kiss sparks a media and fan frenzy, leading to a planned publicity stunt involving Becks and Nicky being in a relationship. It's only for a few weeks and Becks's record label is gung-ho about it all and Nicky agrees to pretend, but what happens when the lie begins to feel true?

This turned out to be the sort of read that exceeded my expectations, what with a story that may have had the familiar strain of the fake relationship trope yet it had more than enough creative and original touches to it from the authors that it resulted in a lovely story of family, friendship, and accidentally falling in love. I'm rather picky when it comes to young adult (YA) reads, knowing full well I haven't been part of the target audience for that genre in three decades (yep, totally aging myself here). However, I'm a firm believer that when the writing is exceptional and the story and characters are memorable and engaging, they're wroth the read, and Dating Nashville is exactly that. The authors did fabulously well with this 4.5-starred read, and I can only hope that the rest of the series will be as worthwhile as Becks and Nicky's own tale. In the meantime, I shall be checking out the Redefining Me series. ♥