Review: The Price of Scandal by Lucy Score (Bluewater Billionaires #1) 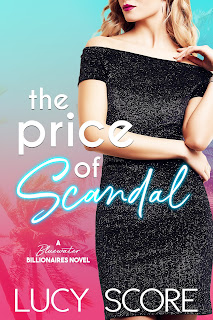 When it comes to the romance genre, there's a plethora of books that have alpha males who happen to be rolling in billions while also staking their claim as they do their fair share of rolling in the sheets with the women they've conquered. Yep, the billionaire (or millionaire) romance is rather popular, but who says all those billions should only be limited to men? Lucy Score--alongside fellow authors Claire Kingsley, Kathryn Nolan, and Pippa Grant--has decided to take the trope and flipped things around, creating the multi-authored book quartet that is Bluewater Billionaires, with Score kicking things off with The Price of Scandal. This is my first read from the bestselling author--although I did get her bestselling Rock Bottom Girl standalone a couple of months ago--and it exceeded my hopes!

Emily Stanton has a functioning brain, undeniable beauty, and billions that she's worked her butt for. Flawless was her brainchild--her baby--and she's reaping the rewards of her self-made company. But then, could someone like her--someone that people see as a woman who has everything--even ask for more? Maybe if her spoiled brother wasn't constantly expecting her to hand over money whenever he demanded, or if her father treated her more like his daughter than as the CEO of a company he happens to be a board member of, or if her mother didn't keep pestering her to find a nice guy and settle down. However, it's a bit of a mishap with law enforcement that has her needing the services of Derek Price. He knows all about well-known and well-to-do clients whose reputations require a bit of buff and shine. His success rate is impeccable, but falling for Emily Stanton would be one major fail.

Well, color me impressed--and a wee bit embarrassed because it's taken me THIS long to read something of Lucy Score's!--because this author clearly knows her way around romantic comedies. I adored Emily and Derek and their having such a well-constructed love story showcases Score's creative and just how frickin' good she is at this whole romance writing stuff. Both Emily and Derek are main characters with layers to them and I enjoyed getting to know these two and seeing them go from animosity to admiration to affection (hooray for alliterations!) and much more. The rest of the cast also has me curious as to what awaits them as the Bluewater Billionaires series moves forward. Let's just say that the bar has been set rather high by the series starter that is the five-starred The Price of Scandal. ♥

Purchase The Price of Scandal on Amazon.