Review: The Dugout by Meghan Quinn 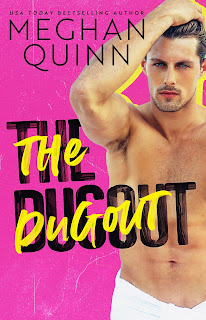 I may have liked The Locker Room, but I loved The Dugout! Meghan Quinn once again brings the laughs and the angst in this second book in her unnamed sports romance series of standalones. It's as if she's stepped everything up with this one, producing a story about a college student who was as awkward in social situations as she was a whiz when it came to baseball and a college baseball player who was on top of the world until he was forcibly knocked off his perch with an injury that was no accident. We've got Carson Stone, considered to be a shoo-in when it comes to getting drafted and making it big in the majors. Unfortunately, he's struck down by an injury and now finds himself in need of someone to help him get back into the swing of things--literally! His secret weapon could be the one they call "The Baseball Whisperer" and "The Diamond Wizard", but when he realizes that the owner of those monikers is the same girl he treated like crap not just once but twice, Carson knows he's got his work cut out for him. He needs to win over Milly Porter so she can help him become a winner again, but the more time they spend together, Carson finds himself hoping to win her heart as well. That is, until he screws up big time.

Well now, Knox Gentry remains my favorite, but Carson Stone certainly gave him a run for his money! Carson was far from perfect, but the man knows how to redeem himself. I liked seeing him become a much better version of himself, and maybe taking a serving or two of humble pie was necessary. Now, as far as Milly is concerned, she's definitely become one of my favorite Meghan Quinn heroines. She's awkward and seemingly uncomfortable in her own skin, but she holds her own and knows full well how good she is when it comes to her knowledge of baseball. She was such a revelation and evolved a great deal from who she was at the beginning of the book to who she becomes by the end. It was also great seeing the rest of the characters, and I REALLY hope we get stories on the other guys that Carson was close to on the baseball team AND Milly's brothers because who doesn't want more?! With Quinn's brand of humor and a fair amount of angst, especially in the last quarter, The Dugout gets five stars. ♥

Purchase The Dugout on Amazon.