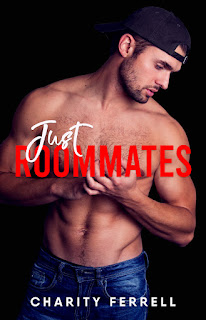 Note: An advanced reader copy (ARC) was provided by the author via Give Me Book Promotions.

The second book in the Blue Beech series had firmly held the top spot as my favorite for four books running, and then book number five came along and gave it a run for its money! Charity Ferrell is back with Just Roommates, a friends-to-lovers romance with a pinch of age gap thrown in for fun. When she was eighteen, Sierra Lane entered Down Home Pub, handed over her fake ID, and was promptly informed by bar owner Maliki Bridges that there was no way he was going to serve her alcohol. Two years later, she took her chances and returned, and well, you know what Albert Einstein said doing the same thing and expecting a different result. On her twenty-first birthday, Sierra's back at Down Home Pub and with real proof of her very legal age, not only does she get a drink but she gains an unexpected friend in Maliki. They may ONLY be friends, but there's something that's been simmering underneath that platonic veneer for months. When she finds herself homeless, Maliki offers Sierra a place to stay, but while becoming roommates may have sounded okay, it was staying "just" roommates that seemed improbable.

From the moment Maliki denies Sierra a drink at his bar at eighteen, they simply clicked with me. That connection wasn't instant but it did grow over time, and while they did have a friendship between them, it was glaringly obvious that it wasn't "just" friendship. The age difference isn't all that huge--about a decade or so, based on Sierra's assessment that Maliki is ten years older than her--so it isn't a stumbling block in their romance. However, there were other issues that these two had to face. I loved how this book felt so different from the four before it. This had a more lighthearted feel, with a healthy dose of humor and banter, and it plays out over several years rather than the usual few months or a year or two. Charity Ferrell has continued to do a great job with this series, and just like the four other novels, this latest one reads well as a standalone--although there are recurring characters throughout and the other books were fun reads as well, so just go ahead and read them in order. You won't regret it! I'm not sure if Just Roommates is the last in the series--I hope not!--but either way, it gets five stars. ♥